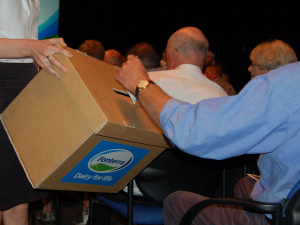 Fonterra has announced a major revamp of its farmer-director election process.

This follows last year’s debacle where only two candidates crossed the 50% vote threshold in the first election, forcing the Shareholders Council to hold a second election to elect a third director.

Changes include removing the Fonterra board’s power to decide which incumbent directors can stand again. Also gone is the 50% threshold required for successful candidates in contested elections.

The changes also remove the need to hold a second election, with the board given the powers to appoint a farmer director to fill the vacancy until the end of the next annual meeting.

The Director Election Review Committee was established in March to review the director election process and recommend ways it could be improved. Made up of board and the Shareholders Council representatives, the committee consulted with farmer shareholders. It updated Fonterra farmers about the changes this week.

The committee says farmers want the election process to be simplified as much as possible.

They also want independence and transparency of the process; farmers “strongly value” information about the skills and attributes required by the board.

Farmers also made it clear that only they should have the power to remove a sitting director standing for re-election.

The committee says “to better characterise” the two different ways that farmers can stand for the board, the Independent Nomination Process and Self Nomination Process will be renamed to refer to 'Independently Assessed Candidates' and 'Non Assessed Candidates' respectively.
All candidates recommended by the Independent Selection Panel will go directly through to the ballot without any further review or nomination by the board and its nominations committee, which is to be de-established.

If one or more candidates in an uncontested election doesn’t achieve that threshold, a second election will not be held.

The board will retain its existing power to fill any such vacancy by appointing a 'farmer' director for the period up to the end of the next annual meeting.
To ensure that only farmers have the power to remove a sitting director standing for re election, board endorsement of incumbent directors seeking re election has been removed.