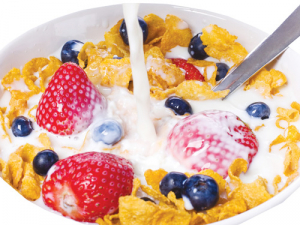 Will our future breakfast be milk, and cereal or a handful of dairy-based pharmaceuticals?

Imagine treating a disease such as diabetes by eating special foods registered as medicines. It's not science fiction.

In this new field of 'pharma food' research, big food companies are spending millions of dollars.

The days when 'food' meant breakfast have long gone, at least in the science world. Now, it splits into, say, functional foods, nutraceuticals and more recently pharma foods.

These new ways of describing food are commonly misused and misunderstood. We need clear definitions to help navigate the current and future role of dairy in a healthy diet.

Functional foods are those shown to have a specific function extra to providing basic nutrition. They might promote mobility by developing and maintaing bones, joints and muscles. Fonterra's Anlene range is a good example.

Nutraceuticals are best described as ingredients isolated or purified from food materials that can be added to foods to make them functional, or sold as nutritional supplements.

The lactoferrin Fonterra isolates while making milk protein concentrates is a good example of a nutraceutical. Lactoferrin has such biological properties as antimicrobial properties and is added to infant formula and also sold in supplements. Demand is growing and we have recently expanded our capacity to make lactoferrin in New Zealand.

Another example of a dairy nutraceutical arose with recent research by Fonterra in the Transforming the Dairy Value Chain Primary Growth Partnership programme with the NZ government on complex milk lipids (CMLs) such as gangliosides.

CMLs are found in breast milk and cow's milk. Breastfed babies have a higher level of CMLs in their brains, which is associated with improved scores on a range of cognitive measures. Our research showed that CMLs extracted from cow's milk can also have cognitive benefits. Using Fonterra's expertise in milk chemistry, dairy processing and nutrition we developed CMLs as a cost-effective ingredient used to create functional foods such as our Anmum product range.

Pharma foods are touted as the new frontier, though the concept has been around for millennia. Hippocrates (c 4th century BCE) said: "Let food be thy medicine and medicine be thy food." Pharma foods directly target a disease by prevention or treatment in a similar way to conventional pharmaceuticals.

What might pharma foods mean for the way we eat dairy in future? Will our breakfast be milk, yoghurt and cereal or a handful of dairy-based pharmaceuticals that cure whatever ails us?

Many countries struggle to cope with rising healthcare costs, particularly as the world population ages. Better nutrition as part of healthier lifestyles is needed.

We know that dairy consumption can save on national healthcare costs. A US study concluded that three-four servings of dairy per day could over five years save at least US$200 billion. A similar study in Australia found that healthcare costs of AUD$2b annually could have been saved had Australians been eating recommended quantities of milk and dairy products.

So no surprise that some companies are spending heavily on pharma food research. And though there will be opportunities, in the short-medium term there will be big obstacles, eg showing that a pharma food has an effect, is safe, has limited side-effects and conforms to a tight regulatory regime.

For pharma foods to make way as dairy company investments will depend on the evolution of regulatory frameworks and advances in research, so that the costs and rules are less restrictive for bringing such products to market.

The market for such foods will take time and effort to develop, in an era influenced by the real food movement which prizes authenticity and products traceable back to their source.

A substantial prize awaits for firms prepared to spend money on meeting the requirements of consumers and regulators; it will take quality science, robust supply chains, product traceability and transparency. That is why the opportunity for functional foods that build upon the natural goodness of milk remains so attractive: it is a way of offering more benefits to customers and consumers and creating more value for farmers.

Consumers want functional foods to help keep them healthy. But they also want foods that are more natural, free from additives and from trusted sources. Safe products from trusted sources that match the values of consumers is among the strong trends in food today. Of course these foods must also taste great, be convenient to eat and fit consumers' lifestyles.

Dairying can now produce natural and functional foods at the convergence of both trends. Dairy nutrition can also be provided in many tasty and convenient formats. We can 'have our (natural functional cheese) cake and eat it too'.

I doubt the future will see us eating a handful of dairy-based pharmaceuticals, but I am confident milk and dairy products will remain in the centre of the breakfast bowl, the dinner plate and the beverage glass.