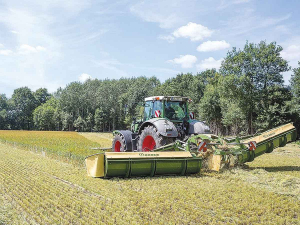 Based at Becks in Otago, on the road that runs from Alexandra to Ranfurly, Bede Ryan Contracting are no strangers to the dry, rocky terrain and the strain it puts on mowing equipment.

Having taken delivery of a new Krone EasyCut B950 Collect mower in October, it would be fair to say that Bede is more than pleased with his purchase.

“We like the robustness of the Krone, and it has a good stone protection set-up,” he says. “Paddocks around here are cleared and rolled, but the occasional rock remains.

“The EasyCut has a good rock protection system. The pins shear off and rotors spin up out of the way to minimise any damage.”

The B950 Collect is a double mower on the three-point linkage. It features an auger system in each unit to deliver the crop into central or lateral windrows that is used in conjunction with a front mounted mower to create a triple set-up.

The configuration can also be used without the augers to create a straight mower. This suits the predominantly dry area where there is little need for conditioners, but also makes the rig suitable for mowing lucerne that can be susceptible to leaf shatter.

Lighter and more compact than a previous grouper set up, the Krone handles the steep, rocky and rough terrain well, following the ground, with pressure easily adjusted from the cab.

With the machine offering the option to deliver centrally or to either side at the flick of a switch, Bede can also opt for one large, or three single rows. Additionally, the collect system offers further options.

“With a thin crop we can group it and then pull in two rows with a rake. Putting more in one row delivers savings on chopping,” says Bede.

While outwardly a large machine that gives the impression that it would limit options, Bede says it’s just as versatile as a single mower because it’s mounted.

“We can back into corners and cut anywhere a single mower can go, as well as having the option to lift either side for very tight areas.”

Bede says that in ideal conditions, powered by a 270hp tractor, output can easily touch 12ha/hour, with an average over the season of around 8ha/hour. Moving between jobs, transport is a simple touch of a switch on the machine’s in-cab control monitor.

Meanwhile, maintenance is minimal and the machine features a quick-change blade system. “This makes it a lot quicker to change blades, with the whole set easily done in half an hour,” said Bede.

Easycut lives up to its name

A new EasyCut B950 butterfly mower from German manufacturer Krone looks to have hit the mark with users.