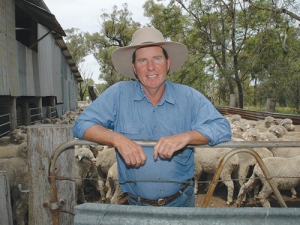 The China-Australia Free Trade Agreement, signed in June, was the subject of a bitter battle between the Government and the opposition Labor Party and unions backing the party.

However, a deal has been reached between the Government and Labor, securing enough votes for the deal to pass both chambers of Parliament.

National Farmers Federation president Brent Finlay is relieved that politics has been put aside in the interests of Australia's economic future.

"This agreement is a game-changer for Australian agriculture, and should never have been held to ransom. Common sense has prevailed: there was always too much riding on this agreement for it to be sidelined.

The NFF has maintained the position that the China FTA will create more jobs for Australians because of increased food and fibre exports and the positive flow-on effects to rural and regional communities.

At the same time, it expressed concern about the potential changes to skilled migration policy which could increase the cost and regulatory burden on Australian farmers.

"We will be looking closely at the detail of today's agreement to assess its likely impact on the sector," says Finlay.

"Bipartisan support for trade has been a mainstay of the Australian Parliament, an example of this proud tradition and we hope to see this continue for Australian agriculture.

"Farmers are capitalising on world leading innovation and digital technology to guide them through the next wave of growth. Trade is a crucial element to facilitate this investment, connecting our food and fibre to a global network of consumers."

Finlay hopes the agreement can be ratified by Parliament this year.

Australian Trade Minister Andrew Robb Australia has enjoyed decades of bipartisan support for freer trade and through the agreement reached with Labor this tradition is now set to continue.

"Our discussions with Labor were constructive and held in good faith, and the shadow Minister for Trade and Investment Penny Wong and her staff deserve credit for the work they have done on behalf of the opposition.

"Before the FTA can enter into force, Australia has to complete its necessary domestic processes and this includes the passage of the implementing customs tariff and rules-of-origin bills currently before the Parliament. To ensure this occurs, the Government has agreed to [clarify] key issues raised by the Opposition," says Robb.

"Crucially, the provisions we have agreed with Labor will not change or contravene the binding commitments we have made to China through our concluded FTA negotiations. Nor will they discriminate against our biggest trading partner."