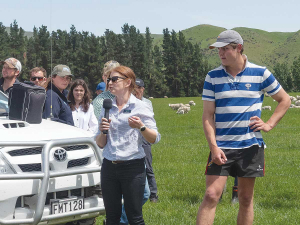 The North Canterbury Future Farm, set up by Beef + Lamb NZ in partnership with local famers, has had an “OK” first full year of operation, said the organisers of its 2019 Open Day.

The operation is based on Lanercost Farm, a 1310ha sheep and beef property in the Leader Valley, north of Cheviot. The farm has been set up from scratch, the previous leaseholder having left nothing behind.

Forrester told the Open Day in early November that the farm ran at a loss of $63,000 in its first full year. But that included a large amount of set-up cost, incorporating companies and setting up a limited partnership, a $97,000 purchase of 810 hoggets and a tractor for $50,000, said Forrester.

“So when you bear that in mind we actually had an OK year and we spent quite a bit of money on the farm just getting things knocked into shape.”

BLNZ’s general manager, farming excellence, Dan Brier, outlined some of the progress made during the year, including a stakeholder advisory panel set up in November, a website created and a five-year stocking plan drawn up with farm consultant Jansen Travis.

They have appointed Kirsti Lovie as Future Farm Insights manager.

“Kirsti’s role is to look into the business, drag the information out and present it in a way that helps you make decisions on your farm,” Brier told the attendees.

Brier said the five-year stock policy aimed to get the farm into the top 20% as measured by the ratio of EBIT to capital.

The original plan had been to focus on trading stock, but the board decided to focus more on capital stock by mating hoggets and using summer crops to get them up to weight for mating, rather than fattening lambs for sale.

BLNZ chief executive Sam McIvor said that as chairman of the Future Farm board he was driven by the bottom line.

“Basically we had to buy everything,from a hammer to nails, to finding a manager, finding stock and getting those enterprises up and going.

“At the same time there’s a tension around wanting to throw some new technologies in there and test them.”

It just takes time to get the system up and running, he said.

“Probably we had a sprint in mind when we first got into it. Probably we’re recognising that it’s not a sprint; it’s probably more a 1500 to a 3000 metre run and this stuff takes a bit more time.”

McIvor told the gathering that climate and water would bring the biggest challenges to farming since the 1980s.

Future Farm would provide the opportunity to put in resources and experts to test ways to handle the changes, and pass the findings back to working farmers who might not have the time and resources to do it themselves, and relate it back to their own operations.

“I see this future farm as a real opportunity to address some of those challenging emerging issues and say, ‘Well guys, we’ve put all these experts around the table; here’s our thoughts about how it will affect our business and our business is a fairly typical hill country farm’.”

McIvor said the farm would be absolutely transparent about the decisions made.

He acknowledged the tension between keeping the costs down and the need to try new systems and technologies.

The Open Day was told that the Lanercost Farming partners wanted to run the operation without going into debt.

“I think we’ll have more discussions about that, actually,” McIvor told Rural News.

BLNZ’s perspective was about doing something different “and putting our money  where our mouth is,” he said.