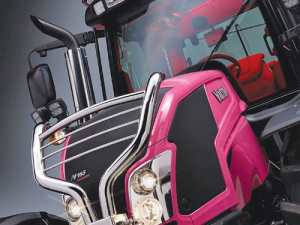 Valtra's Unlimited Design Studio is known for taking tractor customisation to the next level, with upgrades to paint, leather interior, high-end audio and the odd exhaust stack.

A recent special-edition tractor based on one that toured Europe for breast cancer in 2017 can now be ordered in a love-it-or-hate-it colour scheme better suited to Auckland’s K’ Road than a muddy paddock in Waikato.

The ‘Barbie Pink’ N163’s exterior would certainly get noticed at a Young Farmers Ball. And the interior is pretty fancy too -- red leather trim for the seat and steering wheel, red deep-pile carpet and a positively drug-induced lighting system. Here’s betting that if it should ever come to New Zealand, AGCO area managers won’t be lining up to stand next to it in matching overalls. But who knows?