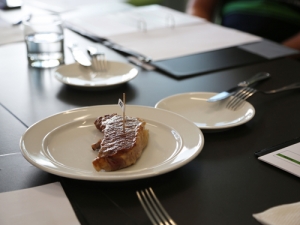 New Zealand’s 20 most succulent steaks have been named as finalists in the 2015 Beef and Lamb New Zealand Steak of Origin Competition.

A panel of 12 well-known food-writers and chefs, including Kerry Tyack and Julie Biuso, tasted a total of 69 sirloin steaks, judging each one on taste, tenderness and aroma, to find the top four for each class.

Semi-final judge, Kerry Tyack says as a returning judge, he was reminded of the outstanding quality of New Zealand beef.

“Although the steaks vary in taste, texture and appearance, they’re all of a consistently high standard,” says Tyack.

The steaks will be tasted once more at the Grand Final, to be held in Palmerston North on May 11.

Between them, the Grand Final judges will determine both the 2015 Grand Champion and Supreme Brand Champion.

The 2015 Beef + Lamb New Zealand Steak of Origin finalists are:

CLASS 3 – BEST OF BREED: CROSSBREED & OTHER