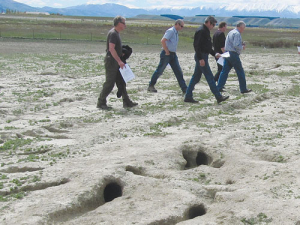 Environment Canterbury says the long-awaited nationwide release of a new strain of rabbit haemorrhagic disease (calicivirus) will go ahead in the next few weeks.

A hoped-for release last autumn was put off because of delays in the regulatory approvals.

“It’s not going to completely fix the problem, but it will give everyone in rabbit-prone areas a bit of breathing space in which they can plan for when rabbit numbers build up again,” Hunt told Rural News.

Hunt farms sheep and beef on 470ha between Wanaka and Hawea and says he spends thousands every year on killing rabbits, on top of the efforts of voluntary rabbit shooters he allows on his property.

He says when the calicivirus release was delayed a year ago he was having to consider extra control measures but in the end did nothing.

“We have been awaiting this decision so we were reasonably confident common sense would prevail.”

Graham Sullivan, Environment Canterbury regional leader biosecurity, said the decision is a milestone for the agencies working to curb wild rabbit damage to farms and the environment.

The controlled release will be in March and April because “research suggests this is the optimal time to increase the effectiveness of the virus against wild rabbit populations,” Sullivan says. A high-quality commercially prepared product will be used at sites selected by the councils.

“While not the silver bullet for rabbit control, we anticipate the new strain will greatly assist the control of wild rabbit populations by supplementing more traditional control methods. The impact of the RHDV1 K5 release will be monitored at a range of representative sites.”

RHDV1 K5 is a Korean strain of the existing RHDV1 virus already widespread in NZ and only affects the European rabbit. Sullivan says RHDV1 K5 was selected for release because it can better overcome the protective effects of the benign calicivirus (RCA-A1), which occurs naturally in wild rabbit populations in NZ.

Meanwhile, Sullivan is advising pet rabbit owners to talk to their vets about protection against the new strain.

Australian studies show an existing vaccine will protect against the new strain. Sullivan says the maker has confirmed there will be extra supplies.