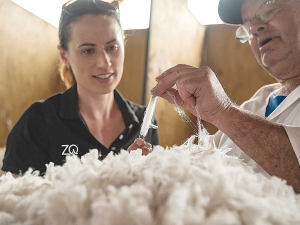 NZM claims this will “improve the sector’s environmental footprint”, while appealing directly to increasingly environmentally-conscious consumers.

The company has partnered with wool apparel and footwear brands Allbirds, icebreaker and Smartwool to launch the ZQRX programme, which promises consumers that the wool they are buying is farmed according to an “index of regenerative farming practises”.

The company has signed up 167 farmers to the programme.

In a press release, NZM chief executive John Brakenridge says the global fashion industry is responsible for 10% of global greenhouse gas emissions and on-farm emissions represent about 60% of the emissions associated with woollen products.

“Regenerative farming represents a considerable opportunity to sequester (store) carbon, and slow climate change,” he said. “Through the adoption of regenerative practices that both store more carbon and emit less, we could reduce our on-farm emissions down to zero.

“We dream of a day when all wool is farmed with regenerative practices,” Brakenridge added.

Dave Maslen, NZM general manager for markets and sustainability, told Rural News that ZQRX builds on NZM’s successful ZQ programme, which was launched in 2007 as an audited set of standards for growers around animal welfare, environmental integrity and social responsibility.

“An audit is really good at setting a base standard but we know that our growers are doing a lot more on their farm every day; they go way beyond what an audit requires them to do.

RX instead uses an index of 15 Key Performance Indicators (KPIs) across environment, social responsibility and animal welfare, and uses “science and data” to measure performance, he said.

Maslen denies that they are merely jumping on a “regenerative bandwagon.”

“It basically speaks to people wanting to leave their properties in a better place or in a better position what it was when they started. I’m not aware of a single grower that supplies us, that doesn’t share that sentiment.”

He says NZM had “a really big portfolio of R&D going on” with local experts and third parties around such things as rates and modes of carbon sequestration in soils, and greenhouse gas net emission calculators.

One example of the KPIs was a monitoring toolkit for growers to be able to measure instream invertebrates, as an indicator of their farm’s biodiversity.

Maslen says the rate at which a grower might move up or down the index depended on the individual. NZM would ask growers what measure they wanted to improve on and NZM advisors would help draw up a strategy to achieve it.

To be part of the programme was to be on a journey of continual improvement, he said.

The number signed up already represented close to half of the 400 in the old ZQ programme, and more were interested in joining.

Maslen did not put any figures on the likely cost to growers in joining the scheme, but claims the rewards were in the returns.

He says the performance of grower contracts under ZQ had been well ahead of the average commodity market and NZM expected that to continue and accelerate under RX.

Ross Macmillan is looking forward to treating a coach load of international visitors to a nearly two-week tour of the South Island’s Merino industry.

A fine win for NZ Merino

An Australian research project has identified compounds in Merino sheep wool that are attractive to blowflies.