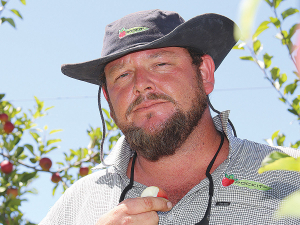 Ben James says there’s a misinformed view that horticulture is for dummies.

Horticulture's biggest challenge is the lack of people prepared to work in the industry, says Ben James, the president of Hawkes Bay Fruit Growers Association.

And school is where the problem starts: horticulture is stereotyped as poorly paid work for people who struggle at school, but that perception is simply not true, says James.

“For example there are schools in Hawkes Bay that don’t offer horticulture in their curriculum yet it is the mainstay of employment in the region,” James told Rural News.

“Part of that is teachers’ perceptions that horticulture is where dummies go – the end of the employment spectrum.

“Misinformed opinions are hard to change and you would be amazed to hear how many young people have never seen an apple tree or an orchard full of apples.”

And it’s not only what is being said that’s the problem. James says often the only photographs people see of horticulture are of people picking fruit.

“That does not accurately portray the highly skilled and well paid jobs and career opportunities the sector offers.”

In the orchard he manages he employs 120 seasonal staff and six permanent staff who don’t pick fruit but manage staff and do higher skilled work.

He points out that a qualified orchardist with a level 4 certificate in fruit production can earn about $22/hour even before they step into a management role.

Despite the career progression the industry now offers it is extremely hard to get staff.

Technology plays a major role at the post-harvest stage, and now there is talk about what role technology may play in harvesting.

“Technology is happening in spraying and irrigation,” he said.

“While there is a lot of talk about technology we are still a long way from having something that can pick fruit. That’s partly due to our canopy design and the need for artificial intelligence to pick the right fruit.”

James says horticulture is in an exciting phase with excellent jobs and good opportunities to build a long term career in the industry.