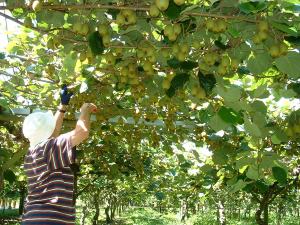 Kiwifruit, one of the main drivers of hort sector's success

New Zealand horticulture is well on track to meet its goal of $10 billion by 2020.

According to the latest Fresh Facts, published annually by Plant & Food Research since 1999, horticultural exports tripled from $1.7 billion 20 years ago. They now accounted for almost 10% of New Zealand’s total merchandise exports. Kiwifruit and wine were the main drivers for New Zealand’s horticultural success.

More than a third (34%) of the export revenue is attributable to kiwifruit ($1.86 billion, up from $1.66 in 2017). Zespri SunGold Kiwifruit has proven popular in key export markets. It now accounts for around 40% of the crop.

Wine contributed to another 31% of our total horticulture exports ($1.69 billion, up from $1.66 billion in 2017). Sauvignon blanc is still the main crop, but other wines, particularly Pinot noir, Chardonnay and Pinot gris, are also increasing in production.

The apple industry remained extremely competitive on the world stage. Apple exports rose to $732.9 million in 2018 from $691 million in 2017. New cultivars such as Jazz and Envy™ provided both diversification and increased value.

With export values reaching $115 million (up from $93.8 million in 2017), the potato industry has seen a shift from fresh potato exports to processed potato products. Onions, peas and squash have remained integral parts of our horticultural export mix over the years.

New Zealand horticultural produce was exported to 128 countries. The top five markets are Continental Europe, Australia, the USA, China and Japan. Together they account for close to $3.7 billion and more than two-thirds (68%) of the total exports. Exports to Asia recorded a significant jump of $912 million to $2.068 billion year-on-year.

“Our industry is well diversified, and it continues to adapt to consumer and market needs to ensure New Zealand products remain in demand and sell at a premium overseas,” says David Hughes, chief executive Plant & Food Research.

“Part of the premium derives from our innovative and sustainable global reputation. We look forward to helping all our sectors realise their potential and deliver a smart green future for New Zealand.”Mike Chapman, chief executive of Horticulture New Zealand, says, “We are delighted to witness the extraordinary growth of our industry over the last 20 years. We’re committed to creating an enduring environment where the industry can continue to prosper and achieve our common goal.”