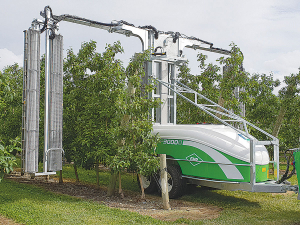 FMR Group has turned its attention to the orchard industry with its new O-Series.

The 2010 release of its R-Series recycling sprayer raised the bar even higher, allowing vineyards to reduce costs further by recycling spray that would otherwise have been lost as spray drift.

Using the technology in this design FMR has now turned its attention to the orchard industry.

Working with Richard and Tristram Hoddy, Vailima Orchards, Tasman district, the company has adapted the same base technology as found in the V-Series to design and build a 3-row sprayer specifically for orchard spraying.

The O-Series uses key technologies common to all FMR sprayers, including a tangential fan system from Weber, Germany, and Arag valves and electronic control equipment from Italy.

Spray drift increasingly bothers rural operators -- especially growers -- as they are pressured to clean up their acts, chiefly by adopting new technology or techniques.

The Weber tangential fan works differently, producing a full length ‘curtain’ of low velocity, high-volume air which is uniform from top to bottom of a tree. This air curtain emerges from the tangential fan with a turbulent twisting action that creates leaf movement and facilitates canopy penetration and even application to target plant surfaces.

The even air curtain of high volume/low pressure air allows the sprayer to be set up quickly to suit specific canopy styles and to minimise off-target drift.

Operator comfort and safety are notable in all FMR sprayers, so the tangential fan system is quiet — even when run at full speed — so improving operator comfort.

The hydraulically driven fan can be run at speeds easily adjusted to suit conditions.

All units have a fresh water tank for system purging and operator handwashing.