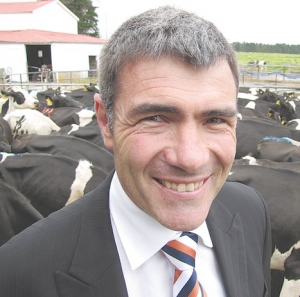 BEEFING UP biosecurity and helping to secure improved market access are two priorities for Nathan Guy as he resumes his role as Minister for Primary Industries.

Guy got back his former job in the Cabinet, but there have been changes to some portfolios concerned with the primary sector. He told Rural News he was delighted to get a call from the Prime Minister saying he was in the Cabinet again.

“I’m looking forward to my role as I have a lot of unfinished business to deal with,” Guy says. “Agriculture is in my blood and I will keep working hard for what is a huge part of the New Zealand economy.”

It will be tougher for dairy farmers this season with the lower payout, Guy says, but they will get through it and the grass will continue to grow. They are extremely resilient.

“They have been through droughts, snowstorms and floods. They have just had a fantastic season despite some strong headwinds including the high US dollar. Last season’s $8.40 payout by Fonterra was a fantastic result and some of that money is still flowing through into this season.

“Farmers would have known… the payout is volatile: it goes up and down. The 15-year average is $5.25. Dairy farmers know it will be tough and they will be working closely with their banks and accountants… doing a line-by-line review of their cashflow and budget.”

One way the Government can help dairy farmers is by pressing for more free trade agreements, Guy says, and he will work with Trade Minister Tim Groser to remove trade obstacles and secure more FTAs. Such agreements offer huge potential for the dairy and red meat sectors.

“I will also work with the new Minister for the Environment Nick Smith on RMA reform, a big part of our economic growth. We [must] manage our economic growth in conjunction with our environmental obligations. I’ll also champion water storage projects and the importance of these for rural and regional New Zealand.”

Maori economic development is another of Guy’s priorities, linked to the Government’s goal of lifting the value of exports to $64b by 2025. Guy says his ministry has some “great work underway” to assist Maori trusts to lift the performance of their farms.

He also wants to work on projects to encourage the “brightest and best” young people into agriculture.

Guy remains optimistic for the primary sector because of the huge demand for protein, especially in Asia. He says the Government will continue to fund science and technology to help farmers improve productivity and profitability.