Fonterra back in India 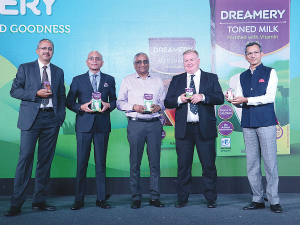 He says India’s dairy market has evolved over the last 12 years and the co-op is well placed to use its dairy expertise to meet the needs of Indian consumers.

This is the co-op’s second foray into India since its inception. In 2001, Fonterra formed a joint venture with Bangalore-based Britannia Industries, but pulled out in 2009, saying at the time that it no longer fitted its strategic priorities.

Sethi says India now has a very different dairy industry. Consumer tastes have changed and they are now open to innovation. Logistics and cold chain systems there have vastly improved.

Fonterra hopes to have a full range of Dreamery dairy products on sale there within two years, using milk sourced in India. And Sethi says Fonterra will also tap into India’s growing food service business by supplying products made in New Zealand.

Consumer demand for dairy in India over the next seven years is expected to increase by 82 billion litres -- seven times the growth forecast for China.

The joint venture partner, Future Group, is present in 26 of 31 Indian states with at least 2000 modern trade outlets and 5000 public distribution outlets and a nationwide cold chain and ambient distribution network.

Sethi will chair the joint venture board with three representatives each from Fonterra and Future Group.

Chairman John Monaghan and chief executive Miles Hurrell visited India a month ago for an update on the joint venture.

Former Fonterra director Earl Rattray believes the timing is right for the co-op to re-enter India.

Rattray, who has dairy farming interests in India, says the country is going through a massive transition.

“This is visible in rising consumer aspirations and expectations around what they buy and where they buy it,” he told Rural News.

Rattray is impressed with Fonterra’s tie-up with the Future Group.

“They are one of these ‘new age’ companies which will transform India, quite a positive disrupter in the market, and run more like what we are used to in terms of corporate governance. It’s a bit like a Walmart of India, except they are Indian, and you need to be to understand the Indian consumer.”

Rattray says the Indian market has come a long way since Fonterra’s first foray with Britannia.

“The focus of that joint venture was initially on fresh white milk across the country, almost the only category at that time. It was competing with established companies which do things differently from what we are used to, and it was competing with the massive informal trade.”