Beltex sheep under the spotlight 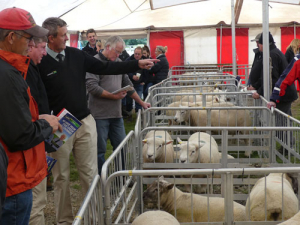 The second annual Beltex sale will be held at Mt Somers on March 1.

All eyes will be on the second annual sale of Beltex purebred and crossbred rams at Rangiatea, Mt Somers on March 1.

Some young crossbred ewes will also be on offer.

Beltex crossbred lambs sold well at the Surrey Hills sale last month, and the vendors are again hoping for good prices; buyers are expected from around the country.

“It is a double-muscled Texel offshoot from Belgium and it has a seriously big backside and eye muscle,” says Gallagher.

He points out that when the original Texels came to NZ from Scandinavia there were no double muscled animals among them.

According to  Allison, Beltex crosses bring substantial premiums in the UK, particularly in butchers’ markets.

“MPI’s decision to allow the direct import of sheep embryos from Europe without quarantine provided the opportunity, which we have taken on behalf of the NZ sheep industry.”

Allison says the the Beltex produces a carcase particularly suitable for premium markets and so provides increased value.

“Increased killing-out percentage and meat yield are the benefits, and particularly a greater eye muscle area and muscling in the leg.”

Allison says there are no lambing difficulties with Beltex rams mated over commercial ewe breeds; the lambs are born “small and vigorous”.

He says this is universally accepted in the UK; the pronounced muscling is not apparent at birth but starts to develop shortly afterwards.

“In the purebred, lambing performance is on a par with the imported Texels in the early 1990s when they first arrived,” he told Rural News.

“NZ breeders will be selecting to improve the pure Beltex over time and to improve other productive characteristics in exactly the same way as with the Texel breed since its introduction.”

Gallagher says the breed is used as a terminal sire that offers specific attributes that will enhance the NZ sheep industry. He claims that it has extra killing-out percentage of live weight to deadweight and also the dressing-out percentage of meat to bone is higher than a lot of animals grown in NZ.

“The other major attribute of the Beltex is the carcase conformation. In the UK saleyards they pay a 15% premium to get a Beltex-cross carcase,” he says.

Allison says they hope to get similar, if not better, prices at the March 1 sale.

About 200 people came along for a field day last week at Tunapahore B2A Incorporation, located at Torere - about…