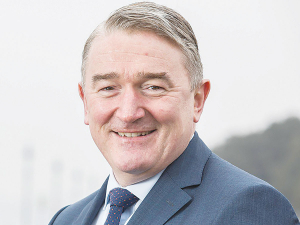 “They don’t want to be told a made-up story and find out that it is fake,” he says.

“There’s been a great resonance in integrity and that’s as important in dairy as in any part of our lives. Dairy, through Covid, has been seen as a positive part of our diets.”

Jordan says Ornua’s key dairy markets have performed strongly over the past 18 months, cementing the position of grass-fed dairy products among consumers.

“We genuinely believe that Ireland and New Zealand are the two countries remaining with predominantly grass-fed dairy systems,” he says.

"That is a real point of difference, and we must leverage that."

Jordan says the difference is tangible and can be seen in grass-fed dairy products like Kerrygold butter and cheese compared with grain-fed products.

The Irish grass-fed difference is behind the global success of Kerrygold butter and cheese.

Jordan says being the number two butter brand in the US makes him smile.

“This little island off the West Coast of Continental Europe and we are the number two butter behind Land O’ Lakes in the entire US,” he says.

Jordan points out that being a co-operative is important and helps them put some rules and regulations around the Kerrygold trade.

Any dairy product in the world that carries the Kerrygold brand name means that the “dairy element” has been produced in Ireland, he says.

“It might be packed abroad – but it’s Irish dairy product from Irish milk from Irish farming families.”

He says Kerrygold is a great asset and real value added for the Irish dairy sector.

Jordan says Kerrygold is sold on the promise of being made from milk from Irish grass-fed cows and having a premium quality and superior taste.

“It’s the Irish grassfed difference that makes the difference,” he claims. “Irish cows graze outdoors for most of the year and grass-fed cow’s milk is rich in natural beta-carotene.”

The Irish dairy industry took off after the end of the European Union quota system that had capped milk production in member states.

Ornua chief executive John Jordan says about €500 million worth of new stainless steel was put into the Irish dairy industry to prepare for the influx of milk.

“The processing plants we have are state-of-the-art and operate to a very high standard, they’ll match anybody on a global scale,” he says.

Irish dairy produces mostly ingredients and consumer and food service products. It has processing plants around the world – Europe, the US, Saudi Arabia and Africa.

Jordan notes that Ornua has little presence in Asia… “probably acknowledging the strength New Zealand has in that market.”

Irish farmers are facing similar concerns to their NZ counterparts about how they can reduce the agriculture sector's greenhouse gas (GHG) contributions without severely restricting their future production and profitability.

New Zealand is looking to Ireland for support as it negotiates a Free Trade Agreement (FTA) with the European Union (EU).

While many contractors still use trucks for haulage duties, the last decade, with the advent of larger tractors, has seen a great deal of interest in the use of high volume, high-spec tipping trailers.