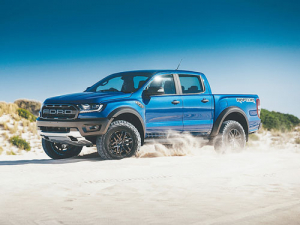 The Raptor is built for fun. Point it down the worst track or gravel road you like, put it in Baja mode to keep the bi-turbo diesel and 10-speed box keyed for speed, and let it rip. The Fox suspension set-up with extra track and travel is designed for extreme punishment and will put a smile on your dial every single time.

This is not just an after-market dress up. The guys at Ford USA who designed the bigger F-150 Raptor were heavily involved in the Ranger Raptor’s development and have produced something special.

The talents of the chassis –- strengthened and equipped with race-developed Fox coil-over shocks that Ford says cost more than the engine – will be hard to fully exploit in New Zealand. We don’t have fast desert trails like the ones the famous Baja 1000 in Mexico is raced over. We do have lots of gravel roads though.

The nice balance of the chassis, the compliance of the softer suspension and the extra 150mm track width also make the Raptor an excellent drive back on the black-top. Even with the massive 33-inch BF Goodrich off-road rubber, this Ranger handles and rides better than any ute we’ve driven, bar none.

You may have read some reviews bemoaning the “lack of power on the open road” from the 2.0L bi-turbo diesel, but most of those wallys missed the point. One, why are you on the motorway pretending this thing should drive like a Porsche? Two, in the rough where this belongs, 157kW of power and 500Nm of torque via a 10-speed transmission is more than enough grunt.

This new engine produces more power and torque than the 5-cylinder Ranger donk (still available in lesser Rangers, by the way) and revs faster and longer. For a daily driver or as a weekend weapon, this power-train is fit for purpose, especially with a range of drive modes at your fingertips. Sports mode is ideal if you’re hustling in two-wheel drive, Baja in four-wheel drive, normal for everything else.

As mentioned, payload is lower than on the normal Ranger at 758kg and so is towing capacity at 2500kg, but this is due to the softer suspension, not the smaller engine, which in a Wildtrak tows and carries the same as the 3.2L versions.

Price may be the kicker. At $84,990 it isn’t cheap, putting it head-to-head with other premium utes that are unlikely to work too hard. The VW Amarok V6 Aventura and the HSV Sportscat+ spring to mind, both impressive in their own way, but expensive and more likely to be towing a jet ski than a stock trailer. And why not? All work and no play, and all that.