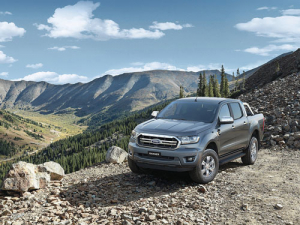 The 2019 Ranger builds on its solid workhorse credentials and the refinement of new powertrain options that should appeal to more customers for a wider variety of uses.

Part of the new offering will be the option of the latest new-generation 2.0L Bi-Turbo diesel engine for the Wildtrak version, already seen in the off-road themed Ranger Raptor.

The new BiTurbo will deliver an extra 10kW at 157kW, with torque increased to 500Nm from 1750rpm, both achieved with the use of two-stage sequential turbocharging, said to deliver efficiency, performance and smoothness.

The new powerplant is coupled to an advanced 10-speed torque-convertor automatic to bring improved flexibility and a quieter, more comfortable drive to the new Ranger, with the close ratios reducing gaps in power and acceleration to make steep, slippery hill-climbs, for instance, much easier.

The Ranger’s proven 3.2L turbo-diesel promises an outstanding payload and towing -- 3500kg on all 3.2L-powered Rangers in all body styles and transmission options. Offering147kW/470Nm, the 3.2L comes with a six-speed torque converter automatic transmission -- the sole choice because manual transmissions have been dropped.

The system, which functions at speeds above 3.6km/h, is standard on the Ranger Wildtrak.

Then there’s traffic sign recognition, which identifies traffic signs at the side or above the road, permanent or temporary, and displays them in the instrument cluster.

In a segment first, the 2019 Ranger Wildtrak also has active park assist to enable semi-automatic parallel parking, with the driver needing only to apply the throttle and brakes as the system steers the Ranger into the parking space. And a new easy-lift tailgate requires 70% less initial force to raise it for closing.

In the looks department there’s a cleaner new grille with distinctive ‘nostrils’, a more chiselled lower bumper and, for the Wildtrak and XLT, LED daytime running lights and HID headlights. There’s also clearer distinction between models visually, with bumper treatments and colours unique to each model.

The Ranger will be offered with passive entry passive start, keyless entry and push-button start as standard on the XLT and Wildtrak, and a host of upgrades to inner surfaces for a quality feel and a long lifespan.

SYNC 3iii with Apple CarPlay and Android Autoiv compatibility continues as standard on the XLT and Wildtrak, including Bluetooth, an 8.0-inch full colour touchscreen and reversing camera.