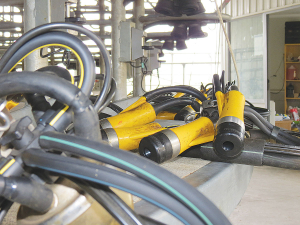 A dairy farmer's first and best defence against mastitis and teat-end damage comes down to one decision.

Industry best practice is to change liners every 2500 milkings. Pushing that deadline out - even marginally - to 3000 milkings, will have a 7% negative impact on milk quality and production.

And, in addition to the production losses and rising BMCC, come the veterinary and/or drug costs, the indirect impact on herd fertility, and the frustration, extra work and worry for the producer.

Liners the heartbeat of successful dairies

The liner - less than 2mm thick in the barrell - spends its entire life under tension and is expected to handle 2500 milkings (or 1.5 million closures). It is also exposed every day to environmental challenges.

"What we often forget is that the liner is the centrepiece of the single most complicated piece of equipment from a food-harvesting point of view," Hunt said.

"The liner is also the sole direct point of contact on a cow's teats, so it plays a big role in controlling mastitis and teat-end damage.

"As the liner ages, its surface becomes like sandpaper. So using overly aged liners causes abrasion on the surface of the teat end. This promotes hyper-keratosis and mastitis issues."

"Over time they cause them to harden and that accelerates cracking in the liner structure - particularly in the heavier rubber areas - which means it's become a host point for long-term bacterial infection."

Skellerup's national sales manager, Mark England, agrees, saying that by the time the triggers to change milk liners become obvious, it is often like trying to close the stable door after the horse has bolted.

"Liners are hidden inside the cups, so you can't see what happens to them when they wear out," England said.

"The first thing you might instead notice is a cow kicking the cluster off, damaged teat ends or a surprisingly high BMCC on the milk docket.

"Our customers, who change their milking liners at the recommended 2500 milkings, routinely report an immediate reduction in teat-end damage, cup slip, a lower BMCC, and faster milk-out times.

"It also helps save power, labour and animal health costs and it can increase milk solid yields, while minimising the risk of penalty grades."

Proof in the pudding

Larundel Dairy changes liners in its 70-stand rotary dairy every two months, because small issues such as split or worn liners quickly escalate into herd-health challenges.

"Once we hit that 2500-milking mark, if we don't change the liners it will only be a matter of days and we'll start seeing split liners.

"It's just not worth it. We're better off staying ahead of the problem."As a result, Larundel Dairy's BMCC average sits comfortably between 180,000 and 220,000.

And in Waikato, Graham and Rebecca Barlow have been equally proactive on their 350-cow autumn-calving herd at Gordonton.

They engaged Pure Milk consultant and vet Adrian Joe to refine their BMCC, which was close to industry averages at 190,000 to 200,000 in their 40-a-side herringbone dairy.

By making some small changes, including moving to manual teat spraying (instead of the existing walkover system), switching milk liners and replacing those liners every 2500 milkings, they dramatically improved teat-end health and dropped their BMCC to a comfortable 130,000 to 180,000.

Milking speed and financial gain was the positive spin-off of addressing liner life for Bruce and Carol Collinson-Smith.

They sharemilk two properties at Otorohanga. The businesses are run as one: the first milks 1100 cows through a 44-bail rotary dairy (in partnership with Bruce's father), and the second,a 50-a-side herringbone (in a 50/50 partnership).

With the help of their local Skellerup representative, and PureMilk consultant and vet Steve Cranefield, they have turned around a historyof mastitis and a BMCC that peaked at around 290,000.

One of their key changes is to now consciously change their liners every 2500 milkings. Cranefield estimated they achieved an overall annual gain of $38,000 per farm.

On one farm, they are listed in the top 3% of New Zealand's herds for low BMCC - finishing grade-free for an entire lactation.

Bruce said, "In the long run it's really cheap, considering what we've gained."

You can calculate how often you need to change your liners based on herd and dairy size and milkings per day.

Getting Liners in Line

Eight ways to get the best out of your liner

This article first appeared in Getting the Basics Right 2020 edition.