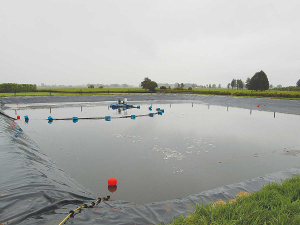 Do you really need a large effluent pond?

Fred Phillips, a natural resource engineer, says Waikato soils are hugely variable and there are large areas of free draining sandy loams and ash soils that are extremely low-risk when it comes to effluent management.

The Waikato also has large areas of what were originally classed as peat soils, the vast majority of which have been drained over the last 80 years and are now organic loams and are likely to be low-risk soils despite being classed as High-risk peat bogs.

Massey, AgResearch and Horizons Regional Council developed a dairy effluent storage calculator to help farmers plan storage to cope with wet weather and heavy clay soils, so that effluent could be stored when soil conditions were likely to give rise to excessive drainage and subsequent discharge into streams.

Phillips says they also included a category for low-risk soils for farmers who were not on the heavy clay soils of the Manawatu or the marine clays common in the Hauraki.

“Having designed the DESC Massey and AgResearch staff had done what they were contracted to do and DairyNZ took over responsibility for the model and successfully marketed its environmental benefits to other regional councils all over NZ so that it has now become the “Bible”,” he says.

“Unfortunately computer models are not biblical and as additional experience and information becomes evident, computer models need to be upgraded and tuned to be more appropriate for the range of conditions encountered.

It is even more important when a programme is designed as a management guide is grabbed by councils and used as a blanket enforcement tool. It happened with Overseer and it has happened with the DESC.

“Councils and dairy companies are on the band wagon telling farmers that they must comply with the DESC. The fact that a person can be successfully prosecuted for not complying with a rule is a lot easier than proving that a person is damaging the environment.”

Phillips notes that many Waikato farmers have been doing an excellent job in relation to effluent management for more than 25 years.

This has been achieved with modest sprinkler and pump systems pumping from small sumps adjacent to the cow yard and irrigated directly onto pasture as soon as the effluent is produced during the washdown process.

He says this has worked well because the Waikato region has been blessed with a range of free-draining soils from sandy loams near the major river systems and vast areas of volcanic ash soils as a result of volcanic eruptions.

Many of these soils have natural infiltration rates well in excess of 15mm/hour.

Farmers who look after these precious soils can apply effluent at up to 15 mm per hour without any risk of ponding, almost every day of the year, he says.

“At lower application rates they are even more secure.

“When the DESC was applied to these very low-risk soils, it became very obvious that the DESC was predicting storage volumes that were excessive, because the very low risk soils had not been identified as an important issue.

“It has taken four years of debate and discussion for it to be accepted that the DESC was not providing fit for purpose advice for farmers with these highly productive and free draining soils.”

Phillips says farmer experience and comparative advantage were being pushed aside and Waikato farmers were being told to invest millions of dollars over and above what was actually needed, to be good law abiding custodians of our land and water.

“It is fair to say that these people have been bullied by well-intended people who did not have the appropriate personal knowledge and experience in soil and water to make judgement calls, but they could look up maps and models on a computer, even if they did not know how to use a spade as a validation or an investigative tool.”

According to Fred Philips, there are six key factors that determine the storage requirements for effluent.

• The area of concrete draining to the effluent sump,

• The amount of water used for washing down,

• The Volume of effluent you are prepared to apply on any day after wet weather,

• The soil characteristics and infiltration rate,

• The sprinkler application rate (this is where the rubber meets the road),

• And how you manage and maintain your system.