Upgrades for precision seed drills around the corner 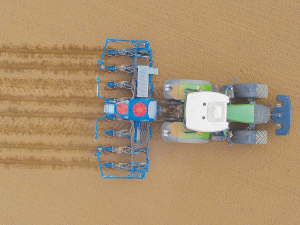 Lemken says its Azurit 10 precision seed drill is facing an imminent upgrade that will offer bigger row spacings and formats.

Arable specialist Lemken has announced several upgrades to its Azurit 10 precision seed drill, available as early as next month.

Alongside the existing four, six and eight-row variants that offer row spacings of 70 to 80cm, the new Azurit is also available in six or twelve row formats with a 50cm row spacing.

Upgrades include a furrow former that has been added to the seeding coulters to improve the quality of seed placement, while drilling pipes have been fitted with an inlet liner, which can be easily replaced when worn.

Another new feature is automatic seed singling for maize, with a system that monitors and adjusts the quality of seed singling. It is available as a retrofit to older machines, while a new fertiliser monitoring system automatically alerts the operator if individual fertiliser coulters become blocked.

The company also offers the option of the MicroHub 5, a spreader unit allows microgranules to be applied in the direct vicinity of seeds. These microgranules contain water-soluble nutrients, which are rapidly available to plants, so are particularly useful in the early stages of crop development. The initial nutrient requirements of fledgling crops can be easily covered by relatively small amounts of microgranules, said to be particularly important in cold, dry spring seasons.

Available for machines with up to eight rows, MicroHub 5 is controlled via the Azurit on-board terminal.

The system has a capacity of 200 litres of fertiliser, which can currently be applied at rates from 1 to 40 kilos per hectare. The metering unit is operated electrically and delivers granules pneumatically to the seed furrow.