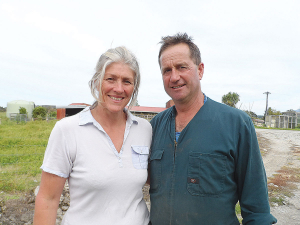 A Collingwood dairying couple is calling for formal recognition of healthy human relationships and wellbeing as quantifiable benchmarks in dairy farming.

Tim and Deborah Rhodes say the industry acknowledges the need for healthy environments and healthy animals, but not healthy humans.

They have asked Fonterra, via the Shareholders’ Council, to adopt a code of practice they call ‘responsible relationships.’

“So we are trying to design an additional, third cornerstone to Trusted Goodness, which we call ‘responsible relationships’, to show that we look after people as well.”

The Rhodes say it should be simple to add quantifiable and auditable measures to a farm’s dairy diary – even something as simple as a checkbox where staff could draw a happy face at the end of the day.

Essential components of the concept would include:

1. Actual staff working hours recorded and reconciled with hours stated in the employment contract, ensuring the minimum wage is paid.

2. A suitably qualified and experienced person nominated to counsel staff or mediate disputes.

3. Personal wellness described and recorded daily in the diary.

4. A plan stated in the dairy diary for dealing with workplace bullying and sexual harassment.

5. Asure Quality could audit information disclosed in the responsible relationships part of the dairy diary, to give proof of the system’s effectiveness.

The couple say they have put hours of thought and discussion into the idea.

Deborah Rhodes is a registered nurse with a background in international pharmaceuticals and Tim is a Lincoln horticultural science graduate and arborist. They have been in dairying for nine years and have owned their farm for five. They supply Fonterra from 133 cows.

Tim Rhodes learned dairying while working for others but observed a bullying culture “that was a lot more apparent to me than any level of environment damage by cows or dirty rivers”.

He said dairy farming relationships can be very complex. An owner may want to step back and let his manager do his job but the manager may have hijacked the business and be bullying his staff, abusing his cows and wrecking his gear.

“This sort of situation often requires the clarity of an independent expert to evaluate the relationships and mediate the situation.”

Mental health and wellness are strongly influenced by the relationships between people, he said.

“And where these were not functioning well, where there wasn’t a lot of respect, what tended to happen was the animals weren’t cared for very well either.”

The Rhodes point out that Fonterra farmers all work under the same risk management plan (RMP) which describes all aspects of animal treatment, environment guardianship and milk quality standards.

“Not covered in our RMP is the way we relate to other people, hence the need to include responsible relationships in our RMP as expressed and audited in the dairy diary. We all dislike the escalation of compliance in the workplace but the way people relate to each other is a huge driver of performance and wellbeing.”

The Rhodes have also coined the concept of ‘conscience farming’ as “a decision-making process which prevents outcomes that could weigh heavily on a person’s conscience such as animal welfare, pollution, exploitation or human suffering”.

“This sits at the top of a pyramid, as an encompassing vision of being well. Achieving a clear conscience is the result of ensuring and measuring outcomes of staff/family and others’ wellbeing, wellness and morale.”

Tim said conscience farming issues might include using palm kernel or Saharan phosphate. These are difficult issues because farmers must also consider their animals’ wellbeing.

Acknowledging ‘conscience farming’ would help build empathy between farmers and the public and between Fonterra and its customers, he said.

“We famers like to have a clear conscience about what we do and if we can demonstrate that we’re doing our best and we understand all of the conscience issues associated with farming, then it helps our wellbeing and it helps us give an answer to people who criticise us.”