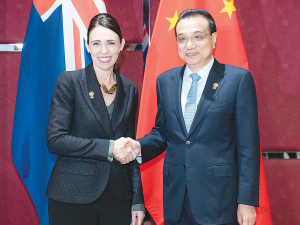 Jacinda Adern with Chinese Premier Li Keqiang at the Summit.

The dairy industry has been left out in the cold with no new concessions, despite Prime Minister Jacinda Ardern and Trade Export and Growth Minister, David Parker seemingly upbeat at the outcome.

The Government says the FTA with NZ is the best China has with any country, reflecting the importance both countries place on the relationship. But NZ dairy industry leaders are less than impressed with the outcome.

Dairy Companies Association (DCANZ) chairman Malcolm Bailey says his organisation is naturally disappointed that the upgrade has not resulted in specific gains for dairy market access. He says the existing FTA provisions will continue for up to four years and only then will there be complete duty free access for all NZ dairy exports to China.

When the FTA was negotiated in 2008, ‘safeguards’ inserted into the agreement meant that if NZ dairy exports to China went over a certain level, tariffs would be applied to them. At the time, exports to China were relatively small, but in recent years their growth has caused the  safeguards -- designed to protect China’s dairy industry -- to kick in.

“At the moment that is costing us about $100 million a year. In the negotiations, the NZ government put the case for the removal of the safeguards, but we met a very unwilling partner on the other side,” said Bailey.

“The point we were making was that the subsequent FTA that China concluded with Australia gives [the Aussies] an advantage and we felt that an upgrade of the safeguards [would be] in order to level the playing field, but the Chinese didn’t see it that way.”

While unhappy that the dairy industry has to wait four more years to see the safeguard tariffs removed, Bailey says the good news is that it is written into the present FTA that these will automatically be removed by 2024.

“We have to look at the big picture. The NZ/China FTA overall is an excellent outcome going back to 2008. It’s just taking a little bit longer than we hoped and we view this as a missed opportunity but that’s the way the cookie crumbles sometimes.”

The other not so great news for the dairy industry in terms of trade was the failure of the Regional Comprehensive Economic Partnership (RECP) summit to get India to sign up to a deal. This sees the door once again shut on NZ which is keen to export dairy products to India. But their government is holding out to protect the local dairy industry, an issue that concerns Bailey.

“There is a lot of defensiveness in the Indian dairy sector. The point that we are trying to get across to them is that exports of dairy products that may result from an FTA with India would be complementary and not a threat to their dairy supply.”

Malcolm Bailey says NZ dairy exports to India would help grow their local industry and potentially set them up to export dairy products.

And there was one final knockback in the past week: a potential roadblock emerged in the negotiations between NZ and the EU on an FTA.

Malcolm Bailey says during a recent trip to Europe he learned that NZ trade negotiators have received a “less than meaningful offer” from the EU on agricultural products. It’s no surprise, he says. Everyone knew agriculture would be a tough issue in the negotiations.

“The EU are pushing the case on geographical indications. They are wanting to limit the ability of NZ to use names that originate in Europe so there is tension in that.

Bailey says agriculture will likely be one of the last issues to be negotiated in the FTA.

National's spokesman on trade, Todd McClay, says the various poor outcomes on the trading front are the result of the Government being distracted and failing to prioritise trade.

He points to the very minor gains made by NZ in the China FTA upgrade and the problems with RECEP and the EU.

“New Zealand officials have worked very hard and are to be commended. However, they have been let down by the Government which now needs to prove itself in trade.