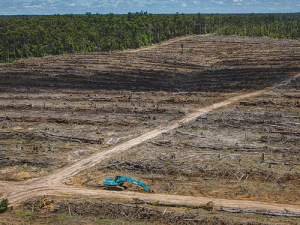 Greenpeace has released photos like this claiming deforestation is taking place in Indonesia by Fonterra’s PKE supplier Wilmar. However, the dairy co-op cannot answer if this is the case or not and says it will have to ‘check’.

Fonterra buys PKE from the Indonesian family-owned company Wilmar International, the first to implement a ‘no deforestation, no peat, no exploitation policy’ in 2013.

Greenpeace last week released aerial photographs of what it claims is deforestation in Papua, Indonesia. Its sustainable agriculture spokeswoman, Gen Toop, says a Greenpeace investigation shows the concessions on Papua belong to a business called Gama.

Toop says documents reveal that it’s run by senior Wilmar executives and members of their family.

“Our investigation has exposed Wilmar’s dirty secret. For years Wilmar and Gama have worked together, with Gama doing the dirty work so Wilmar’s hands appeared to stay clean.

A Fonterra spokesman says “as a matter of process”, Fonterra will check with Wilmar that the information it has provided previously is “up to date and accurate”.

“We understand and take seriously concerns about the exploitation of labour, human rights and land claims in South East Asia.”

Fonterra has previously come under fire for deforestation in Indonesia and its effects on climate change and the habitat of the endangered orangutan.

The co-op agreed two years ago to adopt an industry standard to ensure its use of PKE isn’t furthering deforestation; it also supports organisations that monitor the industry and promote sustainability.

Fonterra set up a palm product standard in 2016 “to ensure the products we use meet sustainability best practice,” the spokesman says.

“All our vendors of palm products must publicly commit to policies that fully support ‘no deforestation, no peatland development and no exploitation’ and have business processes in place to meet compliance.”

Fonterra insists Wilmar has a strict ban on deforestation and exploitation of labour.

Fonterra is a member of the Roundtable of Sustainable Palm Oil and The Forest Trust (TFT), an NGO supporting sustainability in the palm industry.

“Together, we are evaluating the performance of our palm products supply chain and compliance with our standard. Working with our vendors, we have confirmed 96.7% traceability to mill [so that] we know where the PKE is sourced from and to identify any potential high-risk areas or any non-compliance.”

Greenpeace says PKE is “one of the main drivers of dairy intensification in NZ”.

“PKE fuelled the expansion of industrial dairy farming in NZ. We have too many cows polluting our rivers and warming our climate,” Toop claims.