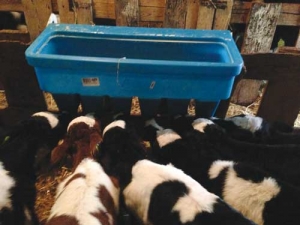 The timing of the first feed of colostrum is crucial.

This month we focus on the timing and methods of feeding of colostrum and how this affects the absorption of vital antibodies.

When should we feed colostrum?

The timing of the first feed of colostrum is one of the most important factors affecting the efficiency of absorption of antibodies (mainly “IgG”).

This is due to the phenomenon of ‘gut closure’ where the intestinal cells of the calf lose the ability to absorb IgG, allowing only a small timeframe of 24 hours for absorption. After 24 hours there is minimal absorption and good quality colostrum fed after this time will result in IgG acting locally within the gut itself.

It is estimated that the decline in absorption is very rapid, resulting in much-reduced absorption even at 12 hours post birth. On this basis, the author recommends the first two feeds to occur within 12 hours, although some literature will recommend these two feeds within 24 hours of birth.

Practical ways to achieve this on farm include:

Collect calves from the calving area at least twice daily and feed the best possible quality colostrum immediately. A second feed of the same volume should occur within 12 hours.

On large farms with tight calving patterns this may seem a daunting task. As a compromise, tube or teat feed stored colostrum in the calving area and record (either visually or in a notebook) that the calf has had one feed of colostrum. A second feed can be given on arrival at the calf shed. While this increases the risk of exposure of pathogens to calves vs the practice of collecting calves twice daily, at least the newborn calf has colostrum on board and is ready for its second feed on arrival at the calf shed.

A recording system should be set up on all farms (small and large) to ensure that all calves receive their two feeds. Calving is a busy time for everybody and a simple system such as whiteboards or spray paint can help ensure that no calf ‘slips through the net’.

How much do we feed?

If calves do not ingest sufficient IgG from colostrum, they are very vulnerable to disease. The term used to define calves that are unable to fight a disease challenge as a result of low blood IgG levels, is failure of passive transfer (FPT). The volume of first-milking colostrum required to avoid FPT depends on the quality of the colostrum.

As a feasible rule of thumb, it is recommended that 4L of good quality colostrum (>22% Brix) is fed within 12 hours of birth. This volume can be split over two feeds. If only poor quality colostrum is available (<22% or lower Brix) calves will need a larger volume to avoid FPT. In such instances, it is recommended that two 3L feeds of colostrum are fed within 12 hours of birth.
How do we feed it?

Colostrum can be teat-fed or fed by an oesophageal feeder (stomach tube). Teat feeding is considered more natural and the natural suckling action stimulates closure of the oesophageal groove reflex. This reflex allows colostrum to bypass the forestomachs (the rumen, reticulum and omasum) and flow directly into the abomasum. The abomasum is considered a ‘simple stomach’ with an acidic pH, much like that of a human being. This acidic environment allows the colostrum to form a curd before passing into the small intestine for absorption.

Teat feeding can be time consuming, is sometimes frustrating and there is often wastage of colostrum. Tube feeding can be quicker and a known volume is fed. However, the oesophageal groove reflex is not stimulated. As a result, colostrum is deposited into the forestomachs and not directly into the abomasum. If only small volumes (~1.5L) are fed by tube, there is a time delay before colostrum flows into the abomasum and subsequently the small intestines. As the antibodies in colostrum can only be absorbed for up to 24 hours, this time-delay can increase the risk of FPT. The good news is that when colostrum is fed in larger volumes (2.5–3L), there is rapid passage of colostrum from the forestomachs to the abomasum.

Research has shown that there is no difference in absorption of antibodies between calves tube or teat fed 3L of colostrum.  Whichever method is used to feed colostrum it is important that enough is fed in relation to the quality that is available and this should be fed as soon as possible after birth.

Colostrum quality can be difficult to influence and there is also a limit to the quantity that can be fed to a calf.

• Gemma Chuck is a vet with The Vet Group in western Victoria.

Made from rotationally moulded polyethylene, the Smart Silo range offers capacities from 280 litres to 30 tonnes.