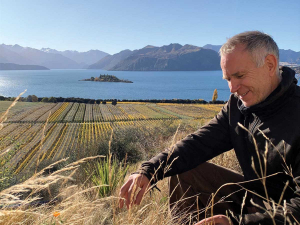 Pull the thread of family succession at Rippon, and you’ll find yourself at Wānaka Station in 1912, with its new owner Percy Sargood. Follow it even further, to 1895, and you’ll find the enterprising Dunedin merchant at a seminar given by viticulturist Romeo Bragato, perhaps seeding the idea of wine in the arid climes of Central Otago.

When Percy died in the 1940s, death duties looked set to scupper succession of the 18,000 hectare high country station, until his daughter Billie turned up at the auction and bought a 1200ha slice of the land, cascading down to the shores of the lake, in the shadow of the Southern Alps.

Her son Rolfe grew up there, probably hearing his grandfather talk of Bragato’s predictions for viticulture in the region, says Nick Mills - Rolfe’s son, Percy’s great grandson, Rippon’s Winemaker and one of the multitude of descendants intrinsically linked to this land.

Whether it was because he’d heard stories of Bragato, because of time spent it Portugal’s Douro Valley after World War II, or simply because there was always wine on the table when he grew up, but somehow Rolfe and his wife Lois decided to establish Rippon in 1975, growing grapes and goats where most thought there should be sheep.

Amidst the high country farmers, Rolfe “looked like a weirdo in the town”, says Nick, drawing a picture of the 50-year-old man and his “beautiful 20-something-year-old wife” – him the dreamer and her the driver behind Rippon.

Nick and his sisters worked on the vineyard in their school holidays, “planting out this very unproven idea”, while living in a rammed earth house, essentially forged from Rippon, he says.

“You get this sense of roots growing out the bottom of your feet. People talk about a weight on our shoulders trying to hold onto the farm, but it doesn’t feel like weight. It feels like your feet are stuck to the ground. You are tied to it. It’s a scary and beautiful thing.”

Billie (“a lover of hosting people and driving fast cars”) married twice, as did Rolfe, whose eldest children are the same age as Lois. That means the threads tied to Rippon are myriad.

“We’ve got a pretty complicated, divaricating family tree, so keeping everyone connected and engaged is super important,” says Nick. Rolfe died in 2000, and Lois continued to build the business they’d founded.

Five family members from Nick’s generation currently work on the 60ha farm, which includes a small herd of cattle, vineyards, habitat restoration areas, land leased to an equestrian business and a hay paddock.

The challenge is to ensure that the many family members who don’t live or work here, including the next generation, can also have a connection back to the land and sense of belonging and care, says Nick.

As a step to meet that challenge, the family has begun work on a template for a “family constitution”, which aims to be a “non-legal, paper version of the bonds a family has to each other,” recording family identity and values, the trust and land ownership structures, and information on how the business and land interact, says Nick.

The constitution is to provide parameters for who sits at the table when decisions are to be made, and will ideally help with conversations around the land and its purpose, he says. “By which the family - once it starts to feel comfortable – will hopefully be able to write their own future.”

Meanwhile, there’s a kānuka grove at the edge of Lake Wānaka - on Billie’s Block - where Rippon’s new generation put up tents, plant trees and dig in their own roots.

It’s about building belonging to the land, says Nick. “To try and get everyone to have the same sense of connectivity as the people who grew up here do… Our kids’ placentas are planted under the trees here and so can their kids’ be. This is their heritage and where they are from.” 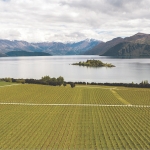 Rippon: A coming of age

Sitting down to talk with Nick Mills, you could empathise with him if his eyes glazed over at the thought of sharing his family history for the umpteenth time...but that couldn’t be further from the truth.