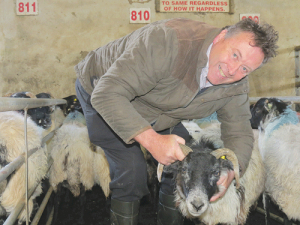 Irish sheep and beef farmers are blaming Britain’s planned exit from the European Union (Brexit) for lower-than-normal prices for their stock.

Farmers spoken to at recent sheep and cattle marts in the west of Ireland, near the city of Galway, blamed the uncertainty over Brexit for low prices.

Patrick Canny, who runs 700 mountain sheep in the vicinity of the town of Maam Cross, says the Brexit issue is not helping the situation.

Tom Connolly, who runs beef cattle near the town of Moycullen, echoes these views, saying it is virtually unprofitable to farm these days given the low prices. Like others he see Brexit as the culprit because it is affecting the value of sterling versus the euro.

These sentiments are shared by Joe Healy, the president of the Irish Farmers Association (IFA), who notes that Brexit has created a vacuum of uncertainty because no one has any idea of what the terms will be for Britain’s exit from the EU.

Healy says in Ireland processors have taken advantage of Brexit and the move in currency and are trying to drop prices way below what could be justified.

The beef market for Ireland is very important because at least 90% of production is exported.

Eamon Nee runs about 300 ewes on the steep rocky hillsides of Connemara, where it’s sometimes hard to distinguish the mountain sheep from the rocky outcrops and heather they shelter near. He says it’s been a terrible year.

“Our store lambs trade is on the floor at the moment, some of this is due to bad weather in the form of incessant heavy rain. The wet has ruined the grain harvest and this has had a knock-on effect,” Nee told Rural News.

“Our lambs go up to the better land to be finished and the prices at present are poor. Prices for our mountain store lambs range from 30 to 40 euros, whereas last year we were getting 40 to 50 euros. So it’s a considerable drop,” he says.

To add to his woes, the coarse hill wool his sheep produce is getting a mere 50 cents/kg which Nee says is poor. With the low prices, he is being forced to seek additional work off the farm to make a living.

His great fear is that the younger generation of sheep farmers will walk away from the tradition of running hill country farms like his.

“We fear down the road that the younger generations will not do this hard work; some just want an easy life and this isn’t. But it’s important that sheep are run on these mountains because they keep the environment in good condition,” he says.