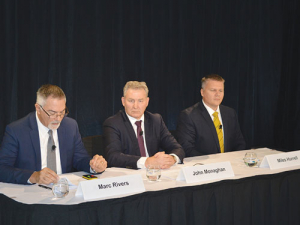 Without doubt, 2018 will be remembered as Fonterra’s annus horribilis.

It is not overstating the case to say that the past year has seen a series of failures and fiascos for the dairy co-op.

For the first time, it reported a net loss for the financial year of $196 million. Meanwhile, weaker global dairy prices have forced the co-op to keep lowering its forecast payout from an opening estimate of $7/kgMS in May to $6.25 to $6.50/kgMS.

On top of this, during the year the dairy company has stumbled from one public disaster to another, notably the under-performance and over-the-top pay to former chief executive Theo Spierings, and the ongoing financial calamity of its investment in Chinese infant formula company Beingmate.

This was topped off last month, when only two of the three director positions were filled in the annual director elections, meaning another election needs to be held.

Last month’s election saw Leonie Guiney – who was ousted from the Fonterra board in 2017 – as one of the two directors elected, along with former Zespri chair Peter McBride. However, two candidates who were recommended by Fonterra’s ‘independent approval process’ were rejected by farmers.

The election process rules meant that the three failed contenders – the two board-approved and the other self-nominated candidates – were ineligible to stand again when Fonterra held a special election.

But, for some reason, the Fonterra shareholders’ council has now decided to change its own election rules. The last-minute rule change means it is holding another ballot this month and only the three candidates who failed to get over the line last time can stand.

However, incumbent director Ashley Waugh has ruled out standing again and only Jamie Tuuta and John Nicholls remain on the ballot.

No one is suggesting that either men are not credible candidates, but Fonterra’s eleventh-hour rule change looks like yet another SNAFU.

One can only hope that the upcoming vote for a new director is decisive and clear. Then Fonterra can finally put a difficult and messy 2018 behind it and head into 2019 focussed on getting its house and company performance in order.