A ute this ain’t! 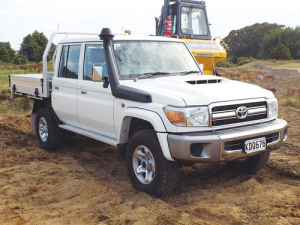 The latest Land Cruiser 70 series is a serious truck.

The latest Land Cruiser 70 series from Toyota is a truck, so it won’t be the choice of Remuera Roamers, Mission Bay Mums or anyone looking for wheels to do the supermarket or daily school run.

What you get is a truck with a 60-year history, one of the longest-lived models from Toyota, and a production count of about eight million and climbing.

Having lived with the 2017 model for a week, and having got used to the ‘look’, this writer finds little to dislike about this venerable old girl.

Yes, it’s a big climb up into the cab, but that’s because there’s lots of ground clearance. The seats can be adjusted fore and aft and the backrest can be raked. But no problem, because once you’re seated these are supportive and surprisingly comfortable.

Yes, the controls are basic, but you could accuse other makers of making life a little too complicated.

As for the engineering, the LC70 gives a big nod to the adage ‘if it isn’t broke don’t fix it’. Much improved in the 2017 model is a raft of safety features – vehicle stability control, active traction control and hill start assist. The first reduces engine power and adjust the brakes in the event of a sudden steering movement or slide; the second re-distributes power to wheels with the most grip; and the latter holds the vehicle momentarily on slopes while the foot is taken off the brake and applied to the throttle.

Looking at the engineering in more detail, chassis rails are 21% deeper and 65% wider. A seventh cross member has been added, shocks and springs have been retuned to improve ride quality, and Teflon inserts, between the rear leaf springs, are said to reduce noise and improve ride.

Up front, the engine is a 4.5L V8 turbo diesel, pushing out 151kW and 430Nm torque, and meeting Euro 5 emission regulations, with the addition of a diesel particulate filter. Transmission is limited to a 5-speed manual box mated to a three-range transfer box.

Slightly ‘taller’ gearing in second and fifth speeds is said to give a more relaxed feel at maximum speeds and helps to reduce fuel consumption by about 10%; that comes in at about 10.6L/100km. The vehicle’s range is improved by a larger (130L) fuel tank.

A big change is the introduction of automatic locking hubs, which combine with front and rear diff locks to tackle the toughest terrains; wheels are one-piece steel or alloy.

A rear-view camera makes hook-up to trailers easier, and electric windows and cruise control take the LC 70 to a new level of sophistication. Does that matter? Not really, because out on the road it drives like a truck, the engine burbles away and pulls like a 15-year-old schoolboy.

The transmission pulls in any gear, so you can drive it like an auto if you wish. The turning circle resembles that of Queen Mary – the ship, not the woman – and its presence commands respect from other road users who keep out of your space.

On the rough stuff, you may ask “where do we want to go?” rather than “where can we go?”

The only real danger is grounding the rear towbar, rated to 3500kg – that also being the maximum load on the tray – and it will carry five passengers. Can you do that in a ute?