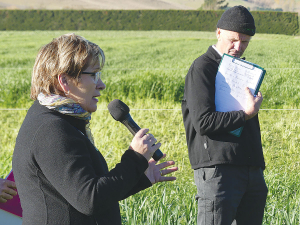 A sheep and beef farmer taking part in the big Forages for Reduced Nitrates Leaching (FRNL) research programme has found its stated goal of a 20% reduction in nitrate leaching out of reach.

However, at 18kg/ha/year, nitrogen loss from Bill and Shirley Wright’s 380ha property near Cave, South Canterbury, has always been modest. But the programme has identified a range of measures that will enable them to do more while keeping N loss low.

The FRNL programme, now running for nearly six years and due to end in September, is funded by MBIE, DairyNZ and FAR, with financial and other assistance from CRIs and Lincoln University.

Research has been done on nine monitor farms across Canterbury: four dairy, two arable, one arable/dairy and two sheep and beef. One of these is the Wrights’ farm.

Bill Wright says that on a sheep and beef farm with relatively low N loss the 20% reduction goal is not profitable or practicable.

In modelling, they had managed to achieve it by selling 40% of the farm’s feed but that also reduced profitability by 60%.

The nearest the farm came to the goal in practice was during the drought year of 2013 when Wright had to destock.

“So we either have a drought and we don’t make any money – that’s a good way to reduce stock numbers and N loss,” he explained. “Or we cut and carry our fodder off farm and sell it to the dairy farmer next door who’s already got a problem.”

However, he adds that it’s essential that sheep and beef farmers understand the impacts they have on the environment and there are many little things that can make a difference.

The former Beef + Lamb NZ director’s farm runs about 75% beef and 25% sheep. He says they have made improvements across their whole environmental impact. This includes fencing waterways to tackle nitrates and sediments, phosphorus and E.coli.

Another change is to finish cattle early. He has also installed a feed pad for them to use in wet conditions.

Wright says most of his soil is heavy clay that does not leach much even in winter cropping. However, he is using more fodder beet and maize and growing fewer winter crops on the lighter free-draining soils.

He no longer grows monoculture feed crops. Instead he puts plantains into all his pastures, lucernes, fescues and clover on heavy soils, or prairie grass with lucernes to try to balance the diet.

“Most of it is about trying to make sure stock have a balanced diet because [then] they tend to have fewer emissions and that includes nitrates.”

She told the recent field day on the Wrights’ farm that they had tried a lot of different strategies to try to shift the farm’s leaching from 18kg.

“What we did show was that Bill and Shirley still had more potential to do more with less so they could hold it at 18 and still potentially be as – or even more – profitable.”

AgResearch scientist Dr David Scobie told the field day there was not much risk of nitrate leaching when grass is rising out of the ground in spring, but things change with autumn grazing. The highest risk comes from urine patches when plant growth has slowed.

“May is our critical point because some of you [sheep and beef farmers] will have cows turning up on your place to go through the winter,” he explained. “Have a think about what you’re going to do today to manage that.”

Another field day speaker, Plant and Food scientist Dr Brendon Malcolm, emphasised research showing the value of getting catch crops in as soon as possible after winter grazing. He pointed to a spading cultivator now being used in Southland which can handle even very muddy ground.

“The take-home really is that the earlier you sow a catch crop the greater the potential to reduce the amount of nitrogen leached.”

Wright says there is not one silver bullet.

“Some of the information we’ve gathered here will hopefully influence some other farmer’s decision making – make them think about where the crop might be, what the image might look like if they’ve got stock grazing it and the public going past and what it might mean to our waterways,” he told the field day.

“We’ve got to be mindful of what you think it looks like from the other side of the fence – what the consumer sees. If you’ve got stock in waterways or stock up to their hocks in mud then it’s not a good image for a start.

“If we avoid that public distaste for what we’re doing and make sure that the public and our consumers are happy with what we’re doing then they’ll buy our product and see that farmers are actually doing their best for the environment.”