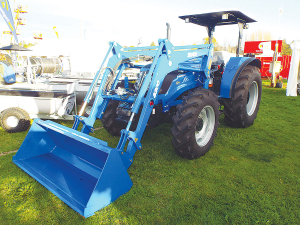 The Soils 90hp agricultural spec ROPS tractor on display at this year's Fieldays.

Imported and distributed by Atlantic Tractors - based in Te Puke, Bay of Plenty - Solis falls under the umbrella of International Tractors Limited, probably better known for its Sonalika brand, formed in 1968.

Today, the business is said to be the third largest tractor builder in India, while also having production facilities in places such as Brazil, Turkey and Algeria.

A tie-up with Japanese company Yanmar provides a source for engines. Meanwhile, a joint venture with the European-based ARGO Group includes the supply of six models badged as Landini tractors.

On display at Fieldays, the range encompassed a broad spectrum: from the Model 26 compact tractors, offered in mechanical or hydrostatic drive configurations, through to a 90hp agricultural spec ROPS tractor and 110hp cabbed units.

The latter machine, priced at a tantilising $66,000 +gst including a front-end loader, features the company's own four-cylinder engine. This comes with mechanical fuel injection, to Tier 3 emission standards.

Looking heavily-built, with a 4,550kg tare weight, the 110hp machine uses a 75l/minute fixed displacement hydraulic system. It has a lift capacity of 4,500kg and is also free from any electronic functions, so could be a hit with livestock enterprises.

Currently establishing a nationwide cadre of service dealers, sales are for now being taken care of by the Te Puke operation. This is while the company expands to local supply - as dealers around the country are established.