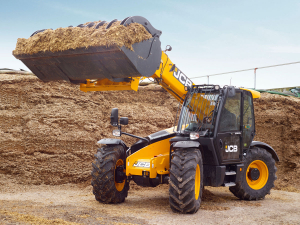 The new JCB Series III Loadall made its international debut at the recent SIMA show in Paris, winning Machine of the Year 2019.

The company spent £8 million on developing this Loadall, said to be 50% quieter, more spacious, more comfortable and with better visibility.
The new Series III Loadall range scored its win in the handling equipment category; JCB previously won the same award at the 2017 event for its AgriPro Loadall.

The competition honours the most innovative agricultural products, with winners chosen by European journalists who specialise in farm machinery.

The latest Series III Loadall is specifically for agricultural operators. It has an all-new Command Plus cab which is quieter, wider and longer, has an improved driving position and controls easier to locate and use. Its instrument display is larger and more informative than previously.

In other JCB News, the UK company has been granted an injunction by a French court against its rival Manitou. The court has directed the French manufacturer to stop production, sales or hire of any telehandlers with a JCB-patented productivity feature. Manitou was to have ceased using the feature by March 13 and must pay all court costs.

In operation, the sensors detect that weight reducing below a pre-set threshold, progressively reducing hydraulic function to prevent weight transfer to the front axle and the machine tipping over forwards.

A feature within the unit reduces the risk of false stability indications as the machine is used for re-handling or travelling over rough terrain, helping to improve productivity.

Portable power on the farm

Erratic weather and seismic events, more frequent these days, are prompting many farmers to have standby generators on site.