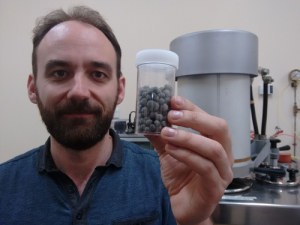 Dr Vlatko Materic, a researcher at Callaghan Innovation and founder of Hot Lime Labs, is developing a CO2 capture material which can significantly boost glasshouse vegetable and flower yields.

His work is rapidly advancing due to a $25,000 grant to demonstrate the technology. The grant from the KiwiNet Emerging Innovator Fund, one of 10 to help take clever ideas and work with business to take to market, was made possible by a donation from the Norman F. B. Barry Foundation.

Dr Materic’s Hot Lime system will help growers to enrich the greenhouse atmosphere in CO2, allowing them to boost yields by up to 20% in a glasshouse environment, in a sustainable and more cost effective way than existing methods. This will help growers to operate at optimal yields, which can be up to 20 times greater than those achievable in an open field.

Dr Materic says, “By enabling access to renewable and low-cost CO2, we can save an average size commercial grower $30-50k per annum per hectare in running costs over using other sources such as natural gas or liquid CO2, if available. Growers will be able to either purchase the system outright, or pay per tonne of CO2 generated at a significantly lower rate than any other option.”

The Hot Lime system allows the recovery of clean CO2 from combustion gases, produced when renewable forestry and agricultural residues – including the grower’s own green waste - are burned in a burner connected to a large filter which can capture and store CO2. The filter contains Hot Lime, a material derived from limestone which acts as a CO2 sponge allowing to separate it from other noxious components in the combustion gases, such as sulphur and nitrous oxides or tars.

Dr James Hutchinson, chief executive of KiwiNet says, “Hot Lime will provide a great alternative source of clean CO2 for growers. Current options such as natural gas are limited in terms of geographical availability and their cost, meaning that demand for CO2 largely outstrips its supply. In addition, they are based on fossil fuels and are a big proportion of the greenhouse carbon footprint.

“Vlatko’s Hot Lime technology is a clever breakthrough that has the potential to power-up a new clean energy sector in New Zealand, not only generating growth in our greenhouses but also in exports and jobs,” he says.

Elly Nederhoff, director of Crophouse Ltd, a global expert in greenhouse and crop technology says Materic’s science is promising in its ability to simultaneously address both ecological and economic issues. “The technology will not only help growers here in New Zealand, it will be an appealing option worldwide. Greenhouse operators will be able to apply CO2 enrichment in situations where otherwise this is impossible or uneconomical.”

Nederhoff says another benefit of the technology is that it’s environmentally friendly in comparison to other techniques of CO2 enrichment as it provides a renewable and sustainable source of CO2.

Dr Materic has been researching CO2 capture systems at Callaghan Innovation for nine years and in 2014 he completed his doctorate at the University of Auckland on using natural limestone as a CO2 capture material.

After identifying the commercial opportunity for his research, Dr Materić met with greenhouse horticulture industry contacts and growers to understand their needs before developing the technology in detail.

KiwiNet Emerging Innovator Funding has provided him with the equipment he needed to demonstrate the feasibility of his process at the lab-scale as well as access to advice and business development mentoring, fund raising and IP protection.

Dr Materic says funding and commercial mentoring from the KiwiNet Emerging Innovator Fund was critical in setting the project on a commercial pathway with the input of industry partners. “The first workable Hot Lime material developed in the lab has shown better than expected performance. I’ve also been able to greatly improve the technological design and devise a system that fits the needs of growers.”

The success of the project has enabled Dr Materic to attract an additional $95,000 of funding through the KiwiNet PreSeed Accelerator Fund, which has been matched by Callaghan Innovation to build a lab scale prototype. He has also taken unpaid leave to progress this project and has started a spin-off company Hot Lime Labs to serve as a vehicle for its commercialisation.

“The goal is to have a prototype completed by March 2017. At that point I’ll need external investors and partners to take it to next stage; which is setting up a pilot Hot Lime system inside an operational greenhouse for a year to prove the technology at scale,” says Dr Materic.

The KiwiNet Emerging Innovator Fund, established thanks to the support of the Norman F. B. Barry Foundation, is available to early career researchers based at universities and Crown Research Institutes across New Zealand who demonstrate a clever new idea and a willingness to work closely with industry as they develop a prototype. Recipients also receive expert legal advice from KiwiNet (www.kiwinet.org.nz) corporate partners, MinterEllisonRuddWatts and IP advice from Baldwins.

Gaining exposure to relevant innovation, "without being swamped in the sheer volume of options", is one of the main challenges for winegrowers considering agrictech.