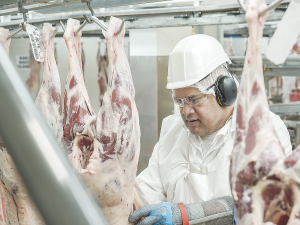 National Secretary of the Meat Workers Union Daryl Carran says workers have done an excellent job and the companies should be applauding their efforts.

Meat workers are tired and fatigued with having to deal with Omicron in meat processing plants around the country.

National Secretary of the Meat Workers Union, Daryl Carran, told Rural News that workers are doing overtime to try and catch up with the backlog in the kill caused by Covid and a general shortage of workers. He says it's not easy work in plants and people are also fatigued by the heat - as well as the pressure to keep up throughput.

Carran says his members have done an excellent job and the companies should be applauding their efforts.

"We have instances where up to 70% of workers in a plant have caught Omicron and production has been impacted by as much as 40% to 50% for up to 10 days," he told Rural News.

"The problem is compounded by the fact that the industry is finding it hard to get people. I know that farmers have struggled to get stock off their farms, but in saying that, it could have been potentially worse. That would have been a terrible disaster and had far reaching consequences."

Carran says the number of fully vaccinated workers in the industry varies from plant to plant, but on average he believes that number is between 70% and 75%. He says in some plants it could be as high as 85% and as low as 60% in others.

He says the common symptoms for the vaccinated is a runny nose, a bit of a sore throat and headaches. But for the unvaccinated the effects of the virus are more severe.

Carran reckons Omicron is now more prevalent in the South Island and notes that this has coincided with the drought in Southland and the demand by farmers to get stock killed. He says while the actions of the companies in putting in place some stringent protocols did initially cost a bit of production, this has paid off in the long term and enabled works to improve their throughput.

Carran says that the vast majority of meat processing companies have worked well with his union by using the government subsidies and freeing up unused sick leave for workers - many of whom are fatigued. He says his job is to ensure everyone remains calm despite the pressures.

However, Carran is worried about the misinformation around vaccinations. He says it is unreal how "good, sensible people" have become mesmerised and fixated by the wrong information.