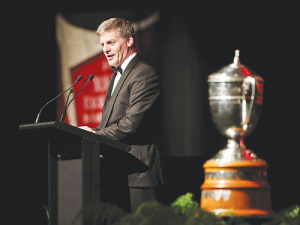 Prime Minister Bill English says in most regions Maori now have the potential to become the largest long-term investors.

People are starting to realise Maori are not fly-by-night investors, he says. They are in business – farms, commercial buildings, investments -- for the long haul.

English said this at an event celebrating the award of the Ahuwhenua Trophy for the top Maori sheep and beef farm, this year won by the Omapere Rangihamama Trust farm, near Kaikohe.

He praised the awards, saying that 20 years ago few people would not have known much about Maori farming. But now the prominence of the Ahuwhenua Trophy has generated huge interest in Maori farming among agribusiness people and news media.

“[Ahuwhenua] works tremendously well in projecting a positive outlook for Maori business,” English said. “It’s changing the perception of Maori in NZ and it’s [encouraging Maori to think] that this is the way ahead. Enterprise, investment, running your own ship: that is how you’re going to get ahead. Waiting around for the government to fix it is not going to work.”

English says the awards are also helping to develop a unique culture within Maori whereby they are benchmarking their farms. Some are large enterprises able to do their own product and genetic development.

“That is a lesson to the rest of us who came through a system of single ownership where you don’t have the depth or scale to do that.”

English applauds Maori diversifying into horticulture, beyond their once-traditional sheep and beef and dairy farming.

“Maori are using their strength to diversify, especially in horticulture which is turning out to be among our faster growing industries.

“It’s great to see kiwifruit showing up in places where no one has grown it before and to see the apple industry expanding with Maori participation.

“It’s been fantastic to see the enthusiasm and the sheer joy for the winners Omapere out of Kaikohe. That’s a part of the country where there are real challenges.”

English also praised the winner and the other two finalists in the Young Maori Farmer of the Year competition. He says developing young people as role models to inspire other young people to make a career in agriculture is vital for the future of Maori farming.