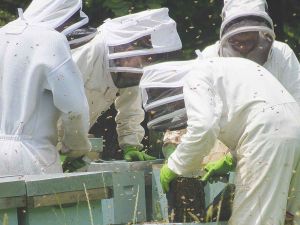 The Mānuka Honey Appellation Society is being granted $5.7 million from the Provincial Growth Fund, including a $1.7m loan, to help in its bid to secure international property rights.

“The Aussies are trying to promote themselves as the owners of the mānuka honey brand. That is wrong culturally, a type of economic larceny,” he said.

Mānuka honey sells for as much as $400/kg and has purported medicinal benefits.

The funding is aimed at supporting a NZ industry push to trademark mānuka honey in China and shut Australia out of the market.

Jones said the money would be necessary to meet the costs of securing international recognition of the mānuka property right and certification in key markets.

“The funding is critical in realising the benefits of comprehensive protection of NZ mānuka honey primarily for consumers and producers,” said chief executive Karin Kos.

She claims it will deliver wider economic and regional benefits for communities and iwi throughout NZ.

A research component will also form part of the overarching activity as a way of advancing the understanding and distinction of mānuka honey.

“The Provincial Growth Fund provides a structured approach to bringing together industry, iwi and the Government and that will support the implementation of best available science and ensure protection of the term,” Kos said.

She says the move is a big step in the right direction and welcome news for NZ beekeepers as it will help to generate long-term value for the industry and provide stability for the future.

Kos says NZ currently exports $350m of honey, but believes it has the potential to grow into a billion dollar industry.

But Australian honey producers are irate about the move by NZ to trademark the term ‘manuka honey’ in China. China is a huge market for the honey, so the move may cost the Australian honey industry up to a billion dollars in export revenue.

Lindsay Bourke, president of the Tasmanian Beekeeper Association, has slammed the NZ Government for the move.

“We’ve been very nice, now we’re getting really sick of it because it’s a lie,” he told Melbourne radio station 3AW.

At this stage, the Australian Government has declined to intervene on behalf of its beekeepers. Agriculture Minister Bridget McKenzie said her office was “seeking clarification” from the NZ Government.

Manuka honey is produced by bees which feed off nectar from leptospermum scoparium, a type of tea tree.

Bourke says Australia has many more species of manuka than NZ has.

“There are 84 manukas in Australia, New Zealand only has one,” he claimed.

“The little manuka tree they’ve got in New Zealand is the exact same one they had in Tasmania, way before New Zealand popped up out of the ocean as an atoll.”