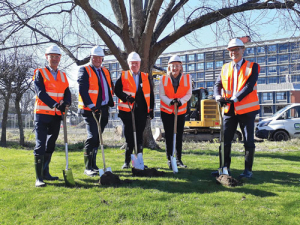 The 27,000 sq.m building will house about 300 AgResearch staff, including its corporate headquarters, a similar number of Lincoln University staff and about 75 DairyNZ staff.

Parts of it will be complete in 2019 and the remainder in 2020. The Burns Wing, standing on the Springs Road side of the site, has yet to be demolished to make way for the new building.

The facility will be jointly owned by AgResearch and Lincoln, with DairyNZ as a tenant.

It is planned to bring together staff from the disparate organisations, and Lincoln students, in a collaborative environment to enhance agricultural science and education.

“The connections forged inside this facility are going to mean a new era of top quality science and impact for agriculture, which will in turn mean more prosperous communities in New Zealand,” says AgResearch chief executive Tom Richardson.

“What really matters is to have staff, students and colleagues in the CRIs to come together and work together in ways that improve the outcomes.

“Lincoln is multidisciplinary but many of those people have not been involved in AgResearch-type projects so the nature of research will change as well,” said Pollard. “My plan for Lincoln is to be completely open to collaboration.”

The project has been closely linked to the Lincoln Hub concept through the planning stages but is not being officially described as the hub building. Pollard said there had been some confusion about the naming of the facility.

Everyone attending the event was invited to join the official party in signing a document to be included in a time capsule to be incorporated into the site. It is not expected to be opened for 140 years, mirroring the 140 years since the laying of the foundation stone of Lincoln’s iconic Ivey Hall building.

Recently published research suggests that farmers should avoid feeding milk replacers with vegetable proteins and fats to lambs in their early life.