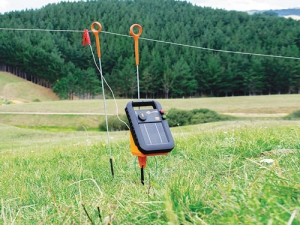 Gallagher Group will exhibit in the Farmlands Village at the Southern Fieldays.

At the Southern Fieldays the company will exhibit in the Farmlands Village, showcasing its latest ideas for dairy herd mating and electric fencing solutions.

The Flashmate electronic heat detector is aimed at farmers wishing to improve their herd's six week calving rates and AI detection. The standalone, lightweight disposable device is placed on the animals' rump where it constantly monitors cow heat behaviour during the mating season.

Using technology similar to a touch screen on a smartphone, and working with a smart microchip that identifies specific patterns of riding activity – including frequency, number and time – the unit flashes red for 26 hours, indicating the animal is ready for AI.

"Following a limited release in 2015, feedback has been positive, and while farmers can't control the weather or the milk price, upping their six-week in-calf rate from 65% to 75% can result in a payback of $60 per cow per year," explains Gallagher national
sales manager Peter Nation.

Out in the paddock, a number of solutions to everyday fencing problems should prove popular, including the S20 portable solar energiser, which builds on the technology first seen in the smaller S10 unit and can pack a punch for 1.2ha or 2km. The device will suit those who don't want to use a battery powered unit, but who need up to three weeks without sunshine once its integral battery is charged up.

Complementing the energiser, Gallagher has come up with a new dual-purpose insulated handle that uses a ring-shaped design to stop the perennial problem of portable fences 'bouncing' off the permanent wire when they are being deployed.