Farm well or get railroaded 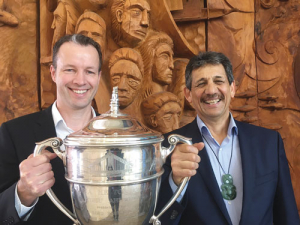 Dairy NZ’s Tim Mackle and Kingi Smiler hold the Bledisloe Cup, which will be awarded to the top Maori dairy farmer this time.

Aligning farming practices so they care for the environment is critical for New Zealand, says Maori agri-businessman, Kingi Smiler.

He said this last week at the launch of 2018 Ahuwhenua Trophy contest for Maori dairy farmers at Tainui College for Research & Development at Ngāruawāhia in Waikato.

Smiler, chair of the committee running the event, says NZ has been too slow in balancing farming practices so as to properly care for the environment. And unless the industry itself takes up the challenge, others will force farmers to do things and some won’t cope and will go out of business.

The annual Ahuwhenua Trophy contest is now in its 86th year, alternating each year between dairy and sheep and beef farming. The 2018 trophy will be awarded for dairying excellence.

Smiler says the Ahuwhenua contest has all along built up a rich cultural and spiritual history and become a symbol of excellence in farming. The entrants, finalists and winners have played a huge part in growing the legacy of Sir Apirana Ngata and Lord Bledisloe who inaugurated the competition.

The contest offers a great opportunity for all Maori farmers, especially those whose peak performance can be an example for other Maori farmers and the rest of the industry, Smiler says.

Mackle says DairyNZ has gained a lot during its ten years involvement in the Ahuwhenua contest. He hopes the entrants themselves have also benefitted.

The 2018 contest entries close on November 24; entry forms are available on the Ahuwhenua website.