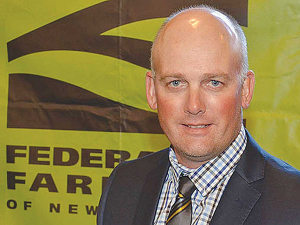 At the same time, banks are raising interest rates.

He says an $8/kgMS payout "is only keeping up" with the rising costs.

Ballance Agri-Nutrients told farmers that the cost of urea production "is increasing significantly on the back of sharply rising energy costs".

"In the last three months, the import price has increased by close to US$200/tonne and we now need to pass some of these costs on," Ballance sales manager Jason Minkhorst told farmers in an email.

"In addition to energy costs, high global demand for arable crops has squeezed the global supply of nutrients, resulting in pricing volatility that is expected to continue over the coming months.

"Ensuring that you have a reliable and consistent source of sustainable nutrients remains our priority and we will keep you updated through the tail end of spring."

"This has resulted in a necessary adjustment to urea prices," Bowick says.

Lewis points out that there are additional costs to what the store charges for fertiliser.

"Buying palm kernel expeller (PKE) which is close to $400 is not a viable alternative either.

"What's the plan? Industry groups have been silent on giving advice."

Last week, Fonterra announced a 40c rise to its forecast milk price midpoint to $8.40/kgMS. If achieved, the milk price would match the record price paid by Fonterra in the 2013-14 season.

Fonterra chief executive Miles Hurrell says the lift in the price range is a result of continued demand for New Zealand dairy relative to supply.

Hurrell says it's still early in the season, a lot can change, and there can be increased volatility when prices are high.

Fonterra's share price jumped on the news that the co-op will provide financial support to improve liquidity in its share trading platform - the Fonterra Shareholders Market.