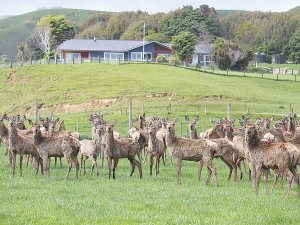 Deer Industry NZ chief executive Innes Moffat says the industry is quietly confident about the future knowing it has a good product, access to markets and an expanding consumer base. He says this will see the price of venison recover next year.

But Moffat concedes that the past 18 months have been very challenging for the industry, which prior to Covid had been doing very well. He says it was one of the most stable primary sectors until it was hit by the Covid whammy, which saw overseas markets literally disappear overnight.

He says before that the industry was capturing a greater share of the USA market and beginning to make forays into China. Moffat says most of that growth was in the food service sector, which offered superior returns to farmers.

"Unfortunately, with Covid, two thirds of our outlets - namely restaurants and events catering - shut down and we were just left retail.

Moffat says this meant the marketing companies had to innovate and find new products and markets to align with customer needs, especially as more countries open up. He says they have been successful in this, getting chilled meat into retail in North American and a bit of a focus on retail items for China. They have also been working on new products to suit Chinese cuisine.

"The companies have developed some new packaging materials and new items are now securing shelf space in retail. For example, Silver Fern Farms - which has been developing retail items for North America - is now selling some of these items in more than 800 stores across the USA.

"So that's from a standing start, where last year they didn't have anything. They have also been developing their online offering, so more sales by third party websites; also more of the home meal delivery service."

But Moffat says while gains are being made, it is simply not possible to turn things around overnight. He says there are issues in Europe with a hangover of frozen venison left over from last season depressing prices.

"It is our expectation that we will see that backlog consumed this year, which means that we will be starting 2022 in a much better position than 2021. Along with the other changes we are doing, we are confident we will be stronger in 2022 than we were a year ago."

The deer industry, like most other NZ primary sectors, is being badly hit by shipping delays and rapidly rising freight costs.

Moffat says shipping delays are having a real impact on the ability to get high value, chilled product to overseas markets. He says the season for sending chilled venison runs out at the end of this month, but the window for shipping this product has been cut by a week to allow for the inevitable shipping delays.

Back on the land, Moffat says most deer farmers are holding their nerve, staying, and hoping that things will improve. The deer schedul is sitting at $7.40 per kg, and he says while it may drop slightly, it is unlikely to hit the low of last season when it dropped below $6.00.

However, like other farmers deer producers' input costs such as fuel and fertiliser are rapidly going up.

Moffat says much of the news for deer farmers in the past 18 months has not been good, but he says while a few farmers are exiting the industry or reducing their hind numbers, most are prepared to stay in the game.

He knows of some deer farmers who are actually expanding their operations in the expectation that things will get better and they can take advantage of this.

"We are assuring our farmers that as our markets reopen, the people who were buying our venison and enjoying this before Covid are still there and they are going to be coming back and buying it again and enjoying it."