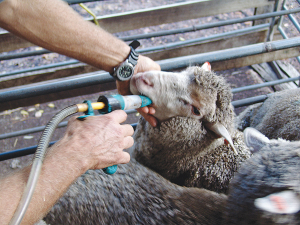 Triple drench resistance is present on a number of sheep farms Beef + Lamb New Zealand’s Wormwise is dealing with.

“It is a reality for them and it will take a lot of managing to get back and they may never get back,” he told a recent BLNZ Wormwise workshop at Wenderholm Regional Park, north of Auckland.

Using drenches in combination rather than a single drench will slow the development of resistance, said Dowling. “It won’t stop it, it will slow it.”

He does not believe farming systems will ever completely move away from drenches.

Dowling says if your system has developed resistance to a combination drench and you change nothing but the drench, your system will defeat that drench too.

“It is a [warning] shot across the bow that you need to change you farming system,” he explains. “You need to look at your own farm and the things that are important and high risk. You need to protect yourself.”

Drenching must be as effective as possible. A drench will kill all worms except the resistant ones. But half resistant ones – offspring from a resistant and a non resistant worm – if they survive drenching and keep mating get worse.

Immediately after drenching you make it easy for resistant worms because they have less competition, he says. The females get bigger and lay more eggs. You get purely resistant worms and resistant eggs for 21 days.

You must drench to the heaviest animal. Get a cylindrical measure because the tapered ones are very inaccurate in the bottom half. Dowling advises the more squirts the better: never trust a drench gun, he says.

To determine if a drenching was effective you need to do a faecal egg count 7-14 days after drenching.  Results a few days after will not be reliable because the drench tends to sicken the females that don’t die and they don’t lay eggs immediately.

You need to do individual counts after drenching so you can see which ones weren’t drenched.

“With 95% of your population in the paddock, it takes a long time for ineffective drenching to affect that population but when it does it takes an equally long time to tip it back the other way.”

In developing triple drenches, the drench companies have spent millions of dollars working out how to make the different drenches stay together. When using a triple drench do not mix anything else with it, he says.

If you are buying in stock it is your responsibility to quarantine drench them. (Triples are not the best choice anymore.) If rearing dairy heifers for someone else you need to be part of deciding the parasite management strategy.

“If your system creates resistance to worms or brings a disease on, it stays on your farm.”

Drench resistance can cost you 14% of the carcase value of the lamb. Lambs with triple resistance will never grow as quickly. If you use an ineffective drench you will breed resistance. “Do your faecal egg count at least once a year on 10 animals, a week or two after drenching, to make sure it has worked. If it hasn’t get your drench gun out again and check it. Drench another mob and see what’s going on.”

Uneaten larvae in grass in summer may only survive six to eight weeks. In the winter they last four to five months.

“It is not fully understood why, but something in some adult ewes makes life so hostile for larvae that they don’t develop into adults.

“So if your ewes have a high egg count, you need to do something about your ewes. It is not a silly idea to faecal egg count your ewes to find out what is happening on your farm.

“One count is a snapshot in time, but doing them regularly year after year you start to get a picture.”

Dowling says two tooths don’t put out as many eggs as lambs. Four tooths are better. Once a ewe is fully mature - considered to be after her second winter - that is as good as it will get. Adult cattle are similar: two year old cattle don’t put out nearly as many worms as younger cattle.

He says faecal egg count test sheep at important times of the year – at least autumn, winter and spring. Faecal egg counting cattle older than eight months is highly inaccurate and likely to miss a burden. In cattle, liveweight gain is the best indicator of which needs drenching in the mob.

The liver metabolises the drench and it is these components which kill the worms, not the drench itself. Oral drench needs to sit in the rumen for as long as possible. Injectable drenches introduce high levels and pour ons are slower and more variable.

Don’t drench lambs in the docking cradle and don’t drench calves on a feeder or calves still being fed milk.

“If you can’t get your cattle to effectively swallow oral drench then don’t oral drench them. If you under dose them you will have just given a whole lot of worms a taste of the drench and they will survive.”

With pour-ons you get a lower level of drug into the animal. With injections you get a much higher dose so you get a better upfront kill.

Dowling says he prefers orals and injections as these have triple combination options.

“Arguments cut both ways but if you want to kill the worms you need a high concentration of drug and susceptible worms.”