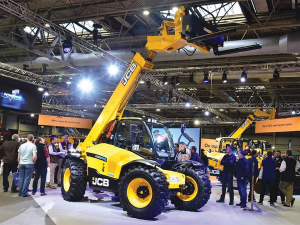 JCB shows off its new agricultural Loadall in the UK.

JCB has given fans a glimpse of its new-spec agricultural Loadall at the recent LAMMA UK show.

The company says the new series 3 range brings together product upgrades from the last six years.

Key to the redesign is a new cab – Command Plus – claimed 50% quieter than the current model; and it’s longer and wider, has better layout, more storage space and much better forward visibility to the wheels and beyond, achieved by fitting a new low-slung dash panel.

Upward visibility to raised forks, buckets or grabs is also 15% better, by virtue of uninterrupted glazing up and over the operator’s head.

Now in its fifth decade since being launched, the series 3 will have four new models with 200kg greater lift capacity than the current offering.

The high capacity, heavy-lift, bulk-handling 560-80 (6t/8m) will remain unchanged, as will the 537-70LP (3.6t/7m Low Profile) that uses a low-profile cabin for restricted height operation.

Variants will include Agri, Agri-Plus, Agri-Super and Agri-Pro options as previously offered with 4.4L and 4.8L JCB EcoMax motors delivering 75, 109, 125 and 145hp.