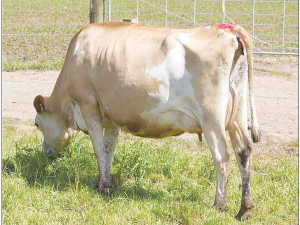 Two weeks ago, retiring Tauwhare-based breeders Dick and Faye Post offered their herd of 265 cows and 85 in-calf heifers in a dispersal sale conducted via online platform bidr®. One of the cows sold for $55,000, purchased by an Otago farmer.

PGG Wrightson national dairy genetics co-ordinator Andrew Reyland offered the herd, which the Posts established in 1960. He said it was one of the most productive in the country.

"This herd consistently averaged more than 400 kgMS per annum of milk solids, equating to more than 1,900 kgMS/ha.

"Much of this performance has gone under the radar for many years. These are good solid cows with a proven shifting ability from surplus females sold over the years," says Reyland.

"Dick and Faye have always been deeply committed, using nominated sires to breed big-capacity Jerseys with functional udders as well as good structure and fertility," he said.

As well as the $55,000 cow, the Otago purchaser also bought the record-breaker's dam for $23,100. Meanwhile, a half-sister, from the same dam, fetched $23,400. Reyland said they share special characteristics.

"This line had slightly different genetics, which made them more interesting to buyers.

"Sired by an A2 bull who transmits high components, the record breaker has excellent production indexes on her maternal line and recorded an udder score of 8-8," he says.

In total the Post's in-calf heifers avereaged $3,347 while the cows averaged $3,240 and 131 unique buyers tuned in to bidr over the sale's three day duration. Farmers purchased the cows ranged from Kaitaia to Invercargill.

Reyland says Dick and Faye Post's was one of several successful recent dairy clearing or dispersal sales around the country.

"An excellent payout has put the dairy scene in good heart, rewarding vendors well, and establishing stern competition for sought after genetics," he says.

A Waikato dairy farm which began its first riparian planting project 20 years ago now stands as an exemplar for rural land users, backed by science and clever long-term planning.

Fire and Emergency are encouraging Waikato property owners not to light fires if there is a chance they will get out of control.