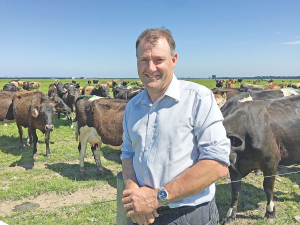 Farming families and communities keen to do the right thing on water should not lose hope and confidence in the consultation process, says a Canterbury dairy farmer and industry leader.

The Government’s proposed nitrogen target for mid Canterbury isn’t attainable, says Colin Glass. But that is no reason to give up on the consultation process, he says.

“It looks as though there is nothing we could do today that would even come close to achieving that target. It simply means that if that target is not amended, farming as we know it today is not possible. Any form of farming.

“The key thing is that farmers are doing the right thing. Everyone is moving in the right direction. Now is not the time for people to lose faith or confidence in the process.

“Potentially this is what these new standards [could cause].”

“We’ve got to be very clear about what is achievable, what can be done so that we still have a vibrant community as well as healthy freshwater,” Glass said.

Glass says he is no scientist but the observation he can make is that in mid Canterbury, for example, the Hines plains have a target under the Environment Canterbury (ECan) plan to get to a level of nitrate in their waterways -- including coastal streams and shallow bores -- of 6.9 parts per million nitrate

“To achieve that target in the plan ECan has developed [would see] farming intensity dropping by 36% by 2035 along with managed aquafer recharge and stream augmentation. That is to get to 6.9.

“This new NPS (national policy standard) for nitrogen isn’t the same standard which has been there historically. This is a new standard based on dissolved inorganic nitrogen. That includes nitrate, nitrite and ammonia and that needs to be less than 1 part per million.

“At a simple level, the plan already in place with ECan and through public consultation -- the one farmers have really stretched and challenged themselves to get to -- is now regarded as not being good enough. It has to get to less than one seventh of that number.”

This is not achievable with any kind of farming we know of today, Glass says.

What came out clearly in the discussion is that even the freshwater panel members themselves could not agree.

“The Government has put this document out for submissions and the panel of experts themselves were unable to agree on what was appropriate for various parts of New Zealand.

“So they have almost gone out inviting feedback from the public to help guide that. That was the piece that was disappointing for me because my expectation is that a panel would have brought in the correct science, weighed up the various issues and concerns and at least formed their own view. But they didn’t do that.”

He urges farmers and rural communities to make submissions on the consultation process which closes on October 17 at 5pm.

“People need to talk about what they are doing to do the right thing. We have come a massively long way. Our whole conversation has changed. Farmers are actively engaged. They are doing more than they ever have before in the environmental space. That has got to be recognised and given credit otherwise [we will] lose people on the journey.”

What came out loud and clear at the meeting was that this is intergenerational, Glass says.

“It will take time to get to any target but the target must be attainable. It is really important that farming families are able to tell their story and say what these numbers mean for them.”

He agrees with the Feds that it is “tough” that such a significant package of legislation and regulation is being allowed only six weeks of consultation. And it is coinciding with the run-up to the local body elections.

OPINION: Wet and wild winter weather can place increased pressure on the banks of waterways, increasing the risk of them being eroded. This can harm water quality and disrupt ecosystems that support biodiversity and water quality.