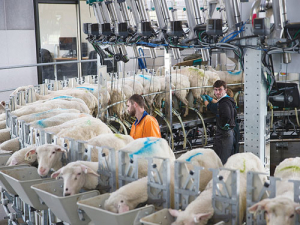 Farmers between Auckland and Taupo can now begin sheep milking with Maui Milk.

The company, a joint venture between Waituhi Kuratau Trust (WKT) and the Chinese company Be Well Food Group, Shanghai, is offering supply contracts.

A field day will be held at Maui Milk’s Waikino Station Farm on the western shores of Lake Taupo on November 21 to update farmers on genetic improvement and farm system development.

Maui Milk processes its milk at the Innovation Waikato dryer in Hamilton.

The company is willing to collect new milk within two hours drive from the dryer.

Gatley says he is regularly contacted by farmers keen to make a change.

“They all want profitability, stability and sustainability. They know about the success of the dairy goats, but many prefer the concept of sheep and grazing systems.

“One of our farms is all outdoors, the other makes some use of barns, but it’s still a grazing system. The big breakthrough was the importation of genetics. Prior to this season, no one in New Zealand had ever milked a modern dairy ewe.

“Now that we’re milking the new genetics it’s time to put some numbers on the table: capital, operating expenses, litres, kgMS, payout and the bottom line.”

Gatley doesn’t expect a large number of conversions to sheep farming because farmers are cautious by nature, he says.

He points to the Dairy Goat Cooperative at Hamilton, now a world leader in dairy goat infant formula.

“It went through a slow start as well; now they have a waiting list of farmer suppliers.”

Gatley also points out strong parallels with other types of farming.

“Once you have decided on your farm system the costs are largely fixed. We already know what the expenses look like, but there is a lot of potential to increase income from milk.

“In the past, large-scale operators in this country have struggled with lactation yields per ewe of only 100 to 150 litres. Barn systems in other countries put out 600L plus, but we look to the hybrid grazing system in France where 400L is standard.”

Grazing offers NZ a competitive advantage in production cost and product positioning.  It is also the preference of most would-be new suppliers in NZ. They don’t want to spend their life in a barn, says Gatley.

The system at the Waituhi Kuratau farm is all outdoors -- no barns. The system at Waikino is also a pastoral system and the barns are there for lambing and occasional use during climate extremes.

“Having both systems enables us to compare the two. We may find both work well and it becomes a matter of preference, just as in the dairy cattle industry,” says Gatley.

Genetics has been a major focus of Maui Milk; Gatley spent at least 20 years in LIC and founded Deer Improvement.

Geneticist Jake Chardon spent a lifetime in genetic improvement; another geneticist, Marion Beniot, hails from the south of France and holds a masters degree in genetics.

Chardon made many trips to Europe, sourcing semen and embryos from there and UK.

“The concept is no different from the Kiwi cow: genetic diversity and hybrid vigour, with selection of milk volume, components, udders and temperament. We now have rams with two generations of progeny tested sires in their pedigree and sisters milking in New Zealand.

Spring Sheep is now launching its products into the local market for the first time.

300 plus rurals turned up at the fifth annual Spring Sheep Co open day at Matangi near Hamilton.