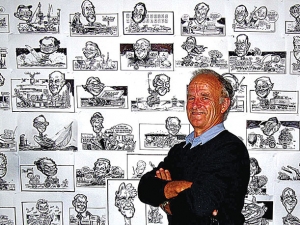 It's almost 40 years since the longsuffering, ever capable Edna, with her spotted dress and rather dour husband, first appeared in cartoons to give a lighted-hearted look at New Zealand country life.

Created by Malcolm Evans, a former NZ Herald cartoonist, Edna first appeared in Farm Equipment News in 1978, before neatly hopping to Rural News when the new publication first went to print in 1989.

Evans began his career as a political cartoonist in the 1960s and since then has drawn cartoons for a variety of publications. The first 'Edna' followed a Rangiteiki Plains flood when he drew a farmer in a dinghy rowing his prize bull to safety. Floundering in the water alongside was Edna, trying to get into the overloaded boat, while her farmer husband told her, "Be reasonable Edna, he's irreplaceable!"

"That was the first Edna cartoon and it seemed to strike a chord with rural women so I kept on doing them," Evans says.

As with Evans' political cartoons, Edna in her quiet way also often swipes at the establishment. But in 40 years the much loved character has never actually said a word: all the dialogue is left to her husband. But still she gets her message across as the perfect foil to the rural man.

"Edna represents the unsung rural women who play an important role in New Zealand country life but often get little credit for it. She's a woman who can do almost anything but is often taken for granted, and her hubby is perhaps more than a little thick."

The character was based on a real person – a woman on a King Country farm Evans visited as a child. Her name is May Mossman who, now in her 90s, lives in Otorohanga and is quietly chuffed that she was the inspiration for Edna.

"Edna was embraced by rural women from the start and, back in the day, they would have Edna days where they would wear spotted frocks or spotted scarves to their meetings. She was a sort of a mascot for rural women.

"Interestingly, for a cartoon character, Edna never looks the same, except for the spotted frock. Whether drawn short, fat, skinny, young or old, the spotted frock is the only constant factor, so all rural woman can identify with her.

"It's been great fun to see the character develop over the years and since Murray Ball's great 'Footrot Flats' strip left the stage Edna is now probably New Zealand's longest running rural cartoon, albeit she only appears fortnightly rather than daily."

Evans was a kid who loved to draw and often "got my bum kicked" for scribbling on his school books. The advertising business was one of few career choices in the 1960s for those interested in art. "And that got me into newspapers where I was able to slide cartoons under the editor's nose."

Evans began cartooning in 1963 with the Bay of Plenty Times before travelling in 1967 and working for a paper in the English Midlands. After returning to New Zealand he started with the Herald in 1970 and went on to succeed the legendary cartoonist Sir Gordon Minhinnick.

The first Edna cartoon appeared in 1976 and when Evans left the Herald in 1978 to start an advertising business, Tom Clark, then editor of Farm Equipment News, asked Evans to bring Edna to the nationally distributed farming paper.

"Cartooning is a 'funny' way to make a living," says Evans. "But, while you have to have a certain bent for it, in other ways it's no different from any other job. We all have to get up in the morning to earn a living, but to do it while practising your hobby is pretty special."

Evans has always stood by his principles and after a second stint at the Herald, in 2003, when he was Qantas New Zealand cartoonist of the year, he was fired for refusing to stop drawing cartoons critical of Israel.

More recently, Evans has syndicated his daily cartoons to the Manawatu Standard, Timaru Herald, The Press (Christchurch) and the bi-weekly Northland Age. And since Rural News Group launched Dairy News and Dairy News Australia he has also supplied them with dairy-specific cartoons.

"Daily newspapers are facing tough times and I've been passionate about helping them remain relevant to their subscribers. As a written record of the events that affect us, newspapers are an important check on governments. I've tried always to do work that says something and to avoid the shallow nonsense of some cartoons these days."

But one thing remains a mystery to Evans. He was born in Feilding, the Manawatu town where cartoonists Murray Ball, Tom Scott, Garrick Tremain and the late David Henshaw were also raised. That's five out of maybe only 10 media cartoonists in New Zealand today.

"I reckon that's really weird. People laugh and say it must have been the milkman and in my case it was: in the late 1940s my father was the milkman in Feilding."

Evans produces personal caricatures of farming people as a sideline to his other cartooning work.

Whether to mark a birthday or anniversary, or perhaps a retirement from the farm, the images also illustrate the many other interests rural people often have, says Evans. “Many involve selfless service to their remote communities.

“Caricatures are enjoyable to do because you are dealing with someone with a fondness for another person who wants to record it in a special way. From pictures they supply I interpret that fondness into a special image for them to give.”

Dealing with the client, Evans develops the cartoon, sometimes asking for more pictures or information as required.

“Then I give them a rough to ok and together we tweak it a bit. And then when we’ve nailed it someone gets a special gift that I’ve had a part in making for them.”

Caricatures are something Evans has always done in addition to a variety of other interests.

“I paint a bit and I sculpt in bronze and I do a bit of commercial art. I did the big bronze of Dave Gallaher that stands outside Eden Park, in time for the 2011 Rugby World Cup.”

He also does cartoons for companies, some combining 100 or more caricatures in one huge image, many drawn to mark the completion of significant commercial deals or contracts.

Contact: This email address is being protected from spambots. You need JavaScript enabled to view it.