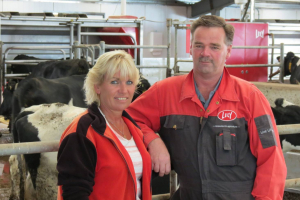 In a letter to suppliers, receivers Brendon Gibson, Neale Jackson and Natalie Burrett, says they are now in control of the assets of businesses of the van Leeuwen Group.

They intend to continue running the business, which comprises 10 dairy platforms and four support blocks with 8000ha under management, milking approximately 10,000 cows. It also includes the world’s largest robotic farm.

Owned by Aad and Wilma van Leeuwen, the business was among a number of other farmers around New Zealand who have suffered from the Mycoplasma bovis outbreak, which hit their farms in July 2017.

They were embroiled in a legal battle with Ministry of Primary Industries (MPI) in a dispute about compensation. They have already been paid out $6.3 million by MPI, but sought further compensation for professional consultancy fees, bank charges and assorted other costs.

On Wednesday Calibre Partners wrote to the van Leeuwens giving notice that Merricks had appointed them receivers.

Fonterra farmers will start the new season with strong cashflow, thanks to an opening forecast with a record midpoint of $8/kgMS.

Good news for Fonterra farmers: the co-operative has announced an opening forecast farmgate milk price range for the 2021-22 season of $7.25 - $8.75/kgMS, with a midpoint of $8/kgMS.