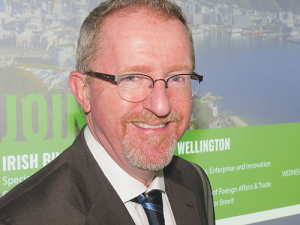 A senior official in the Republic of Ireland (Eire) Ministry of Foreign Affairs and Trade says his country is puzzled and saddened by Britain’s decision to leave the EU.

Eamonn McKee, visiting NZ briefly, recently told an Irish business network that there is little Eire can do except hope for the best and try to get the best deal possible in the circumstances.

McKee says with the vote in the British parliament postponed, Ireland doesn’t know what may come next. He says Eire would much prefer an orderly exit as it provides some certainty.If Britain crashes out of the EU it raises the issue of what will happen to the border between Northern Ireland and the Republic of Ireland – a complex problem which has already caused much angst there.

It’s not only the border McKee says, it’s also the transport of Irish goods to Europe.

“About 60% of trucks from Ireland go through Britain to deliver in the EU, but also drop stuff off in Britain,” he told Rural News. “We refer to it as the land bridge because the easiest way to get Irish products to the EU is through Britain.

“But if Britain crashes out you could have chaos at the ports and that is a major issue. It would mean that our trucks would have to go by sea to Europe which is longer and more expensive.”

McKee says Eire will miss having the UK as a member of the EU. He says they have been a good partner and were pro-business. He says the UK was very influential within the EU and carved out a good relationship with Brussels.

“We are going to miss them.”

McKee says the British market is very important to Eire and many people in Britain would not distinguish between Irish and British products.

“While there is a lot of anxiety about what might happen I suspect most of the trade will continue uninterrupted but maybe with some tariffs. People will try to keep the status quo as much as possible.”

As a result of Britain leaving the EU, McKee believes Eire will have to create new alliances within the EU to compensate for the absence of the UK.

“So we are finding partners like the Danes, Dutch, Belgians andother countries with a pro-business agenda.”