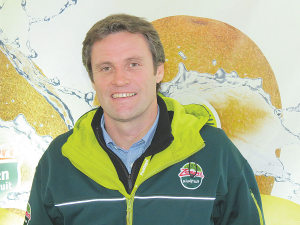 This season, Zespri estimates that it will sell a total of 175 million trays to export markets - well up on last season's 155 million trays.

"More consumers have been looking for healthy and nutritious foods and kiwifruit obviously fits in perfectly to that growing trend, which we also saw last year," he says. "So, we are really on trend there and believe that this trend is here to stay. The other thing that has been really good for the kiwifruit sector is that more and people have been eating and snacking at home and again looking for healthy and nutritious snacks."

Mathieson says demand in all of Zespri's major markets - such as China, Japan, South Korea, Taiwan, Spain and Germany - is strong as is demand in Italy, France and the Benelux countries.

"Spain has been going very well for us now for the lat 10 years and that's been driven by more Spanish consumers looking for health and nutrition," he adds. "We have been able to supplement the NZ production to that market with strong production out of Italy and France, giving Spanish consumers great quality fruit every day of the year."

But the season has not been without challenges, in particular the logistics og getting kiwifruit to market. Mathieson says Zespri has done much to mitigate the problems with shipping by chartering a large number of refrigerated container ships. He says about 70% of their fruit is shipped in this way to the larger markets such as China.

However, shipping product to small emerging markets in South East Asia has been challenging as kiwifruit has to be sent on standard container ships that carry other products beside kiwifruit.

"We have seen delays of from anywhere from 5-15 days getting product to market," Mathieson says. "This has created gaps in the supermarkets for our products, which is something we are trying to fix with the shipping companies. But it is a problem we are likely to see for the foreseeable future."

Back in the orchards, the weather has played a part in the readiness of fruit to export. Mathieson notes that the previous two seasons have been drier, which means the fruit has been ready earlier. But he says this year has been more of a 'normal' season and they have had fruit coming in later than might have been expected.

Early July is when Zespri will know if it's got the go ahead to conduct a one year trial to grow SunGold Kiwifruit in China. The aim of the trial is to try and control the amount of illegally grown Zespri Gold 3 in that country after a Chinese national, living in NZ, illegally sold cuttings of Gold 3 to growers in China. It's now estimated that there is about 4,500 hectares of this variety throughout that country.

Zespri chief executive Dan Mathieson says before it can undertake the trial, 75% of growers need to give their approval. He says the organisation has been engaging with growers through a series of roadshows around the country. Voting in the referendum closed at the end of last week and the result is expected in early July.

"We have had some really robust conversations with our growers at the meetings and also at Fieldays," he says. "We have been getting some real support, but there are some that oppose the trial."

Initially, Zespri proposed a three-year trial but this was dropped before being put to the vote with growers and instead approval for a one year trial was proposed.

Zespri staff have been working for many years to try and stop the pirating of SunGold by rogue Chinese growers without success. They believe that a trial, which has support from officials in China, is the best way of mitigating the present problem.

Free fruit and vegetables normally delivered to schools are being redistributed to charities during the current lockdown.